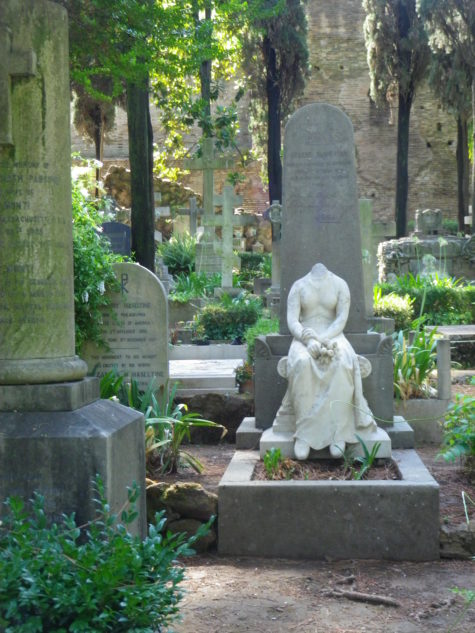 The Feralia was the closing festival of the ancient Roman festival of Parentalia. During the Feralia, families would picnic at the tombs of their deceased family members and give libations to the dearly departed. It was believed that the shades of the dead could walk upon the earth above their graves during Feralia.

Roman citizens were instructed to bring offerings to the tombs of their dead ancestors which consisted of at least “an arrangement of wreaths, a sprinkling of grain and a bit of salt, bread soaked in wine and violets scattered about.” Additional offerings were permitted, however the dead were appeased with just the aforementioned.

Ovid tells of a time when Romans, in the midst of war, neglected Feralia, which prompted the spirits of the departed to rise from their graves in anger, howling and roaming the streets. After this event, tribute to the tombs were then made and the ghastly hauntings ceased.

“And the grave must be honoured. Appease your fathers’ Spirits, and bring little gifts to the tombs you built. Their shades ask little, piety they prefer to costly offerings: no greedy deities haunt the Stygian depths. A tile wreathed round with garlands offered is enough, A scattering of meal, and a few grains of salt, and bread soaked in wine, and loose violets: Set them on a brick left in the middle of the path…

…and hide the gods, closing those revealing temple doors, Let the altars be free of incense, the hearths without fire. Now ghostly spirits and the entombed dead wander, Now the shadow feeds on the nourishment that’s offered. But it only lasts till there are no more days in the month Than the feet that my metres possess. This day they call the Feralia because they bear [ferunt] Offerings to the dead: the last day to propitiate the shades.” – Ovid

To indicate public mourning, marriages of any kind were prohibited on the Feralia, and Ovid urged mothers, brides, and widows to refrain from lighting their wedding torches. Magistrates stopped wearing their insignia and any worship of the gods was prohibited as it “should be hidden behind closed temple doors; no incense on the altar, no fire on the hearth.”

From: Wikipedia and Nova Roma

Promote Your Page Too
Bread Crumbs
A trail of bread crumbs in case you lose your way wandering through this site ... Pagan Calendar > Blog Page > Day of the Dead > The Feralia