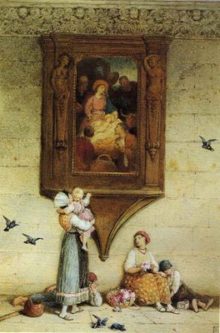 December 28 is Dyzymas Day, also known as Holy Innocent’s Day, or Childremass. This day has always, in one way or another been associated with children. In more recent times the connection is specifically with the children slaughtered at the orders of Herod, who feared the prophecy of the Magi that a new King of the Jews had been born in Judea.

Throughout the Middle Ages this day was considered particularly unlucky and it was believed that no task begun on December 28th would prosper. Both the French King Louis XI and the English King Edward IV refused to do any business on this date, and the latter postponed his coronation when it was originally planned for this inauspicious date.

In Northamptonshire it was known as Dyzymas Day and a local saying was:

“What is begun on Dyzymas Day will never be finished.”

A more barbaric practice that continued well into the eighteenth century was to beat children on this day. This seems to have been a curious mixture of ideas – that if the children were made to suffer on this day they would be spared the rest of the year, and, moreover, that such beatings would drive out any evil spirits who might have taken up residence in the child.

These beatings rarely involved real cruelty. Indeed, the underlying theme of the day was a kind of equality. Thus wives and husbands exchanged token blows, and in parts of Germany and Sweden children were permitted to beat their parents.

Freshly gathered evergreen branches were used for this task, with birch and rosemary being particularly popular. A chant preserved from this time goes:

Fresh green! Long life!
Give me a coin!

While in other places servants beat their masters crying:

The whole idea seems to have been to show that by expressing individuality and exchanging gentle blows, true anger and aggression might thus be waived for the coming year – an enlightened notion from which we might well learn today.

From The Winter Solstice

Promote Your Page Too
Bread Crumbs
A trail of bread crumbs in case you lose your way wandering through this site ... Pagan Calendar > Blog Page > December > December Lore > Dyzymas Day