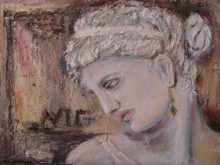 About Charila: Charila comes to our aid when there is a famine, a drought, or some kind of abuse, be it in the earth or in our spirits. Greek mythology tells us that Charila was a young girl who approached a king seeking food. The king was angered and slapped her. Charila hung herself in disgrace, but not without some notice by the Delphic oracle. The prophetess told the king to change his unsympathetic ways and make offerings to Charila to appease her spirit. Some traditional offerings for her include honey cakes and grains.

About this holiday (June 3):

On the first day of the Thargelia, a festival of Apollo at Athens, two men, the Pharmakoi, (usually slaves, cripples or criminals), were led out as if to be sacrificed. This practice was also relied on in times of disaster (famine, invasion or plague) or other times of crisis. It was believed that this would bring about purification. During this observance in Greece, the Pharmakoi were ritually driven out of the city with leeks and onions rather than being executed. This act of mercy propitiated Charila, cleansed the city of its “sins,” and ensured continuing good fortune for the region. This also brought fertility, onions being an aphrodisiac.

To do today (or whenever a purification is needed):

To draw Charila’s kindness or good fortune to your home, take a handful of any type of grain and sprinkle it on the walkway near your living space saying:

Follow me, wherever I roam,
and let tenderness and luck fill my home!

And whenever you need Charila’s mercy, productivity, forgiveness, or protection, definitely add onions and leeks to the menu. Alternatively, you could make 2 poppets or dolls to represent your situation, and toss them off your property along with a handful of leeks or baby onions.

From: 365 Goddess and other sources

Promote Your Page Too
Bread Crumbs
A trail of bread crumbs in case you lose your way wandering through this site ... Pagan Calendar > Blog Page > Greek Festivals > Pharmakos