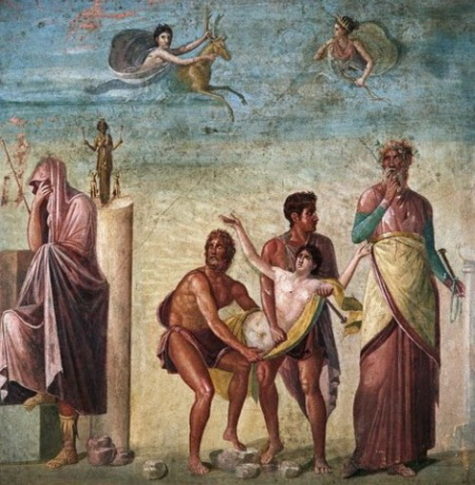 Thargelia (Greek Θαργήλια) was one of the chief Athenian festivals in honour of the Delian Apollo and Artemis, held on their birthdays, the 6th and 7th of the month Thargelion (about May 24 and May 25).

Essentially an agricultural festival, the Thargelia included a purifying and expiatory ceremony. While the people offered the first-fruits of the earth to the god in token of thankfulness, it was at the same time necessary to propitiate him, lest he might ruin the harvest by excessive heat, possibly accompanied by pestilence. The purificatory preceded the thanksgiving service.

The most important ritual was the following. Two men, the ugliest that could be found (the Pharmakoi) were chosen to die, one for the men, the other (according to some, a woman) for the women. Acting as scapegoats for community guilt, they were draped in figs and led through the city. before being cast out.

Hipponax of Kolophon claims that on the day of the sacrifice they were led round with strings of figs on their necks, and whipped on the genitals with rods of figwood and squills. When they reached the place of sacrifice on the shore, they were stoned to death, their bodies burnt, and the ashes thrown into the sea (or over the land, to act as a fertilizing influence). However, it is unclear how accurate Hipponax’s sixth-century, poetical account of the ceremony is, and there is much scholarly debate as to its reliability.

On the first day of the festival, a sheep was sacrificed to Demeter Chloe on the Acropolis, and perhaps a swine to the Fates, but it is generally agreed that an actual human sacrifice took place on this occasion, replaced in later times by a milder form of expiation. Thus at Leucas a criminal was annually thrown from a rock into the sea as a scapegoat: but his fall was checked by live birds and feathers attached to his person, and men watched below in small boats, who caught him and escorted him beyond the boundary of the city. Similarly, at Massilia, on the occasion of some heavy calamity (plague or famine), one of the poorest inhabitants volunteered as a scapegoat. For a year he was fed up at the public expense, then clothed in sacred garments, led through the city amidst execrations, and cast out beyond the boundaries.

After having rid the city of any ill influences on the first day of the festival, the second day begins with a joyous attitude. It follows the basic structure of any other Hellenic festival. First, there was a procession, which included children who carried the eiresione, an olive branch decorated with woolen fillets, bread, fruits, small flasks of honey, and some with oil. The children would sing the following while carrying this:

“The Eiresione brings figs and fat bread,
honey in pots, and oil to rub down,
a cup of strong wine so you go drunk to bed.”

As they moved through the city, they would collect offerings along the way. Once arriving at the temple, the offering of the first fruits of the grain harvest would begin. From the surviving texts we learn that the offering was of two types: a boiled stew of grains and seasonal vegetables, or the loaf of grain bread called the thargelos. It is from the name of the loaf that the festival takes its name. This loaf was also called eueteria, meaning “good year.”

There would also be libations, hymns, much feasting and other activities during the celebration. Singing competitions were especially popular, in which 50 men from the 10 tribes of Athens participated. All of these were done in honor of Apollo, god of purification.

For a more modern approach, we have this idea: 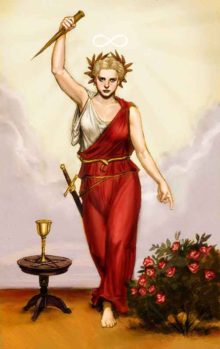 Follow Greek tradition and leave Hosia an offering of fruit, bread, or wheat to encourage her assistance. Next consider creating a personal ritual for cleansing or forgiveness. Hosia will guide your hand in choosing words and actions suited to the working. Alternatively, take out your ritual tools and ask for hosia’s blessing on them saying:

Hosia, these are the tools of my hand, heart, and spirit.
They symbolize the elements and the corners of creation.
Today I ask that you empower them for working magic,
and regulate their use for the greatest good.
May they always direct my energy in perfect love and trust.
So be it.

In ancient Greece, a scapegoat (often a criminal) was often identified to bear the sins for an entire community, then either sacrificed or banished into the wilderness. A way to adapt this practice is by designing an image of something you need to banish, then “driving it away” by putting it in the car and leaving it in a remote spot. As you turn away, ask the goddess Hosia to witness the rite and to empower your efforts for positive change.

Posted in Greek Festivals, May | Tagged Farming and Husbandry, Out With The Old, Plowing and Planting

Promote Your Page Too
Bread Crumbs
A trail of bread crumbs in case you lose your way wandering through this site ... Pagan Calendar > Blog Page > Greek Festivals > The Thargelia