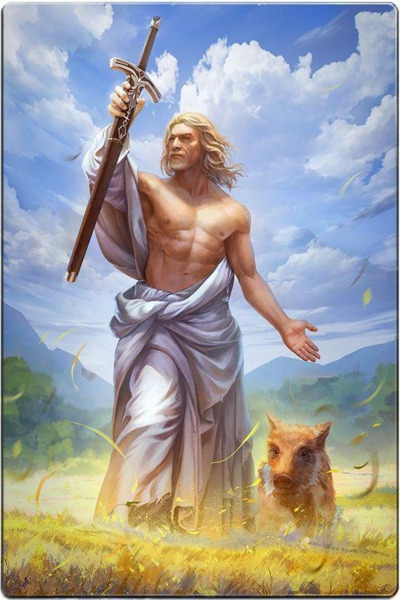 Freyfaxi, Freysblöt,  or Hlæfæst (which means Loaf Feast) which celebrates the beginning of the harvest. There is no specific “correct” date for this harvest festival; some groups celebrate it at the beginning of the month (to coincide with Lammas), some mid-month, and some on the full moon.

Freyr is the Norse god of fertility and harvest and a blöt is a sacrifice or offering to a god. So Freysblöt is offerings to Freyr, this is done in celebration of the beginning of harvest. The feast is also thought of as holy to Thor as a harvest God and his wife Sif, whose long golden hair can be seen in fields of ripe grain.

The first sheaf of harvested grain was bound and blessed for the gods and the vaettir (land or place spirits). Bread baked from the first harvest was also made into an offering and shared with the community. 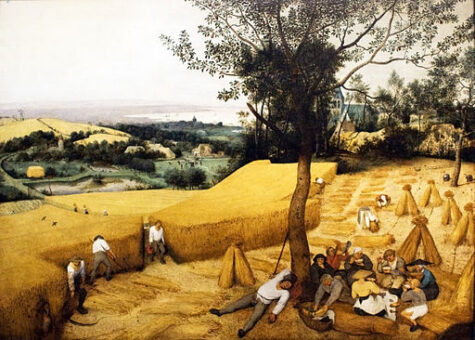 In Viking times this is also when the warriors who had gone off to fight at the end of planting season came back, loaded with a summer’s worth of plunder and ready to reap the crops that had ripened while they were gone. It is almost like American thanksgiving, feasting and celebrating the first fruits and grains from harvest.

In modern times this is often just before back-to-school giving families and kindreds a good opportunity to celebrate together before the added stresses of homework and extracurricular activities. While the celebrations were modest compared to some of the other major holidays it was still an excellent reason to gather in celebration and to recognize the prosperity in our lives.

Since it draws from First Harvest traditions, the dates would vary regionally, but falls sometime in the beginning of August, because that is when many of our gardens are coming into full production. Typically in the northern hemisphere it is around this time that we celebrate the bounty of the Earth, and the gifts that she brings us with the help of Frey.

In truth, “Freyfaxi” is basically made up and can be celebrated by any group that wants to when they want to. It isn’t wholly without reference, as it draws on a history of First Harvest traditions, but it isn’t historical by any means. Wikipedia pins it on August 1st, the Ásatrú Alliance’s holidays page dates it as August 19th, and many Pagan Calendars date it to August 23rd.

Loaf-Feast is the end of the summer’s vacation, the beginning of a time of hard work which lasts through the next two or three months, while we ready ourselves for the winter.

The holiday of FreyFaxi was much more important for the lives of our ancestors that it is today. Without a good harvest, many many people would perish in the winter. We honor Frey to thank him for the many harvests that we have had, if there was one terrible one, some of us may not be here today. Thanks to Frey we are. If a year was particularly horrible, drastic sacrifice would be used –  animal, or even human in some cases.

Even though many of us are no longer farmers, we still depend on the land for all that we are given. Maybe we do not depend on it directly but most of us go to the grocery store and buy things that have come from the fields. This is a time to honor Frey, god of the harvest, rains, and fertility. A time to thank him for the bounty of the earth, and all the gifts that he bestows upon us.

Today we honor him with mead, or some type of drink, food from our table, typically foods we harvest ourselves, for example baked bread that we have made ourselves from the wheat he has bestowed upon us. It is traditional to mark the holiday by baking a figure of the God Freyr in bread, and then symbolically sacrificing and eating it. Any way that you honor Frey, is a good way. Traditionally however, it is with a blot and feast.

We honor him because without him, simply we would not have much of our food supply, and quite obviously without that, we do not have much at all! He bestows fertility to the fields and plants, gives them life, giving rain so that they may grow and flourish.  These plants including trees, give us oxygen. So if you are not going to honor Frey, son of Njord, for the bounty of the land at least honor him for the life of the plants and world around us! 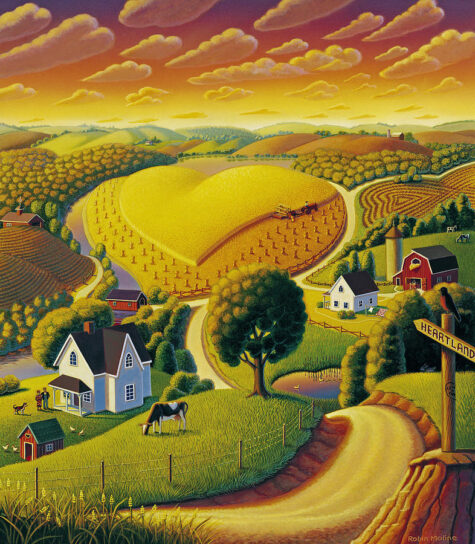 We honor Frey by giving him a blot, and a grand feast from our own gardens and the fields. (If you do not have these things at least go spend some money and get a few things from a farmers market or something similar). We thank Frey, and honor him for the harvest and the fertility of the land and ask him to give the land even greater fertility in the coming year and in the dark of winter.

Promote Your Page Too
Bread Crumbs
A trail of bread crumbs in case you lose your way wandering through this site ... Pagan Calendar > Blog Page > August > Freyfaxi – Frey’s Blott