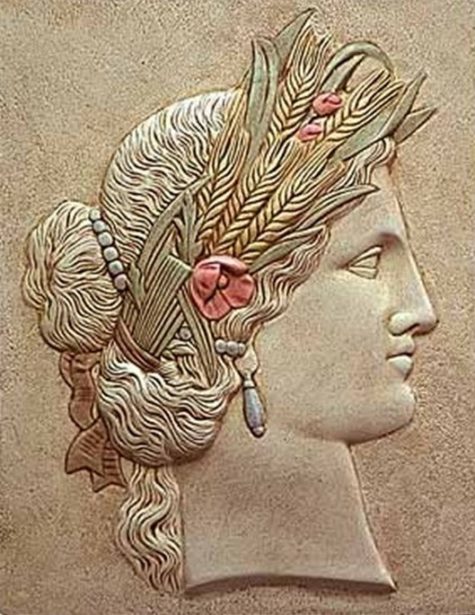 Today (April 12) is the first day of the Ludi Cereales, another spring vegetation festival, this one in honor of the goddess Ceres, goddess of grains and cereal crops. It lasts for eight days, and like the Megalesia before it, the Cerealia culminates on its final day.

During Roman times, one of the symbolic rituals of the final day was the release of foxes into the Circus with flaming brands attached to their tails despite the fact that Ceres is notoriously a peaceful goddess and most often accepts offerings of spelt cakes and salt, as well as incense.

In the countryside, people offer milk, honey, and wine on the Cerealia (particularly the final day), after bearing them thrice around the fields. 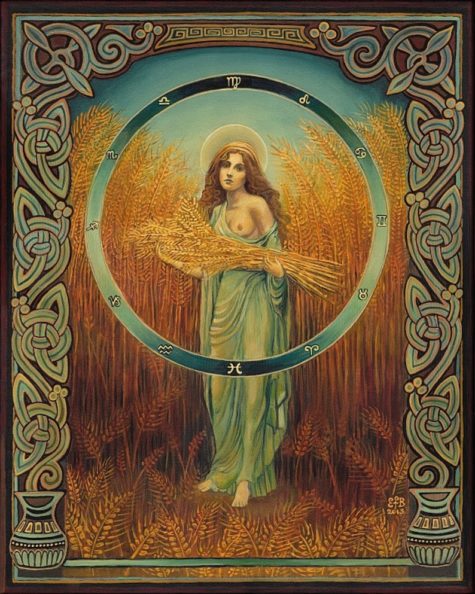 More About This Festival

Ceres is the Goddess of agriculture, and was credited with the discovery of spelt wheat, the yoking of oxen and ploughing, the sowing, protection and nourishing of the young seed, and the gift of agriculture to humankind; before this, it was said, man had subsisted on acorns, and wandered without settlement or laws. She was the first to “break open the earth”, and all activities of the agricultural cycle were protected by her laws. She held the power to fertilize, multiply and fructify plant and animal seed, whose offspring were the physical incarnations of her power.

Her first plough-furrow opened the earth (Tellus’ realm) to the world of men and created the first field and its boundary; she thus determined the course of settled, lawful, civilized life. She mediated between plebeian and patrician factions. She oversaw the transition of women from girlhood to womanhood, from unmarried to married life and motherhood and the growth of children from infancy. Despite her chthonic connections to Tellus, she was not, according to Spaeth, an underworld deity. Rather, she maintained the boundaries between the realms of the living and the dead.

Given the appropriate rites, she would help the deceased into afterlife as an underworld shade (Di Manes): otherwise, the spirit of the deceased might remain among the living as a wandering, vengeful ghost.

The goddess was worshiped in many ways. There was the porca praecidanea, which involved sacrificing a fertile female pig and was necessary before a harvest. Cato indicates that sacrifices of any large food item will do, however, and suggests a pumpkin as an acceptable substitute for a pig, since it can be cut open and the seeds offered to Ceres in much the same way the entrails of the pig would be. After the offering of the porca praecidanea, it was customary to also give the goddess a libation of wine.

The poor could offer wheat, flowers, and a libation. The expectations of afterlife for initiates in the sacra Cereris may have been somewhat different, as they were offered “a method of living” and of “dying with better hope”.

Ceres’ major festival was the Cerealia – the ludi cereales, culminating on April 19 to celebrate the growth of grain and other agricultural products. Its original form is unknown; it may have been founded during the regal era. During the Republican era, it was organised by the plebeian aediles, and included ludi circenses (circus games). These opened with a horse race in the Circus Maximus, whose starting point lay just below the Aventine Temple of Ceres, Liber and Libera. In a nighttime ritual after the race, blazing torches were tied to the tails of live foxes, who were released into the Circus. The origin and purpose of this ritual are unknown; it may have been intended to cleanse the growing crops and protect them from disease and vermin, or to add warmth and vitality to their growth

Religiously, the purpose of the races and the games were to make the goddess favorably disposed toward the Roman people, so that she would give them a good harvest.

Visual depictions of Ceres were largely derived from Greek portrayals of Demeter. On two coin types, a bust of Ceres was pictured on one side, while a yoke of oxen was on the other. On other coins, she wears a crown of grain stalks called a corona spicea, holds stalks of wheat, and is occasionally pictured with wheat and barley grains. One coin actually portrayed her wearing a modius, an instrument used to measure grain, on her head. Another pictures a bust of series on one side, and a pair of seated male figures with a wheat stalk to their side on the other. The seated men represent the official distribution of grain to the people. Annona, the goddess who personified the wheat supply, appears alongside Ceres on several coins from the imperial period. Reliefs from the Augustan period have even gone so far as to depict her as a plant growing out of the ground. In one her bust emerges from the earth, holding bunches of poppies and grain in her upraised hands while two snakes twine about her arms.

Ceres also assimilated the visual symbols of the Eleusinian Mysteries, which most Romans observed in her name. Ceres is depicted with symbols of the Mysteries, such as riding in a chariot drawn by snakes while holding a torch in her right hand.

Persephone’s Return ~ A Ritual For The Cerelea

Most often celebrated on the last day of the Ludi Cereales (or April 19).

Altar: Upon a green cloth set as many spring flowers as possible, a bowl of earth saved from the day of Persephone’s descent, and the figure of a girl’s head emerging from the earth. 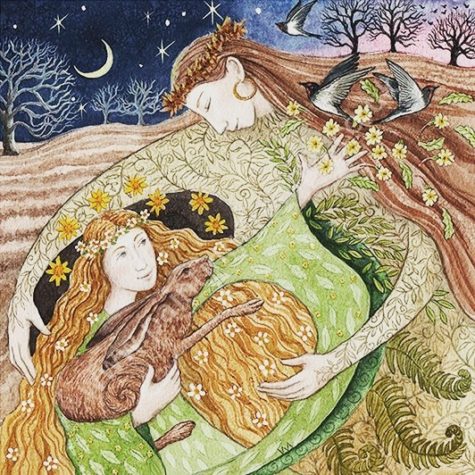 Let the Earth take joy!
Demeter’s heart is warmed,
For her beloved daughter,
The maiden of Spring,
Has returned to the upper world!

Let all upon the Earth take joy!
Flowers spring from her footsteps,
Grass spreads between her toes,
The promise of the summer wind
Falls like butterflies newly loosed
From her hair the color of poppies and clay.

Let us all take joy!
She who descended in the autumn,
She who is married to Death
And yet arises in the bringing of Life,
She who has passed the bodies
Of a thousand corpses,
She who has sung with the shades
Of a thousand ancestors,
She rises to greet the morning sun
For as long as it is her time.

Then, like all things, she will descend again,
Into the depths of the Earth,
And we, we shall learn to love that cycle
Of rising and falling, of birth and death,
And truly call it a blessing.

Let one chosen for the work of the daily ritual carry the bowl of earth from person to person about the hall, and let each one take a bit of the earth and rub it on their faces, and let it remain until the evening ablutions.

~Info collected from various sources, including the Pagan Book of Hours

Promote Your Page Too
Bread Crumbs
A trail of bread crumbs in case you lose your way wandering through this site ... Pagan Calendar > Blog Page > April > The Ludi Cereales