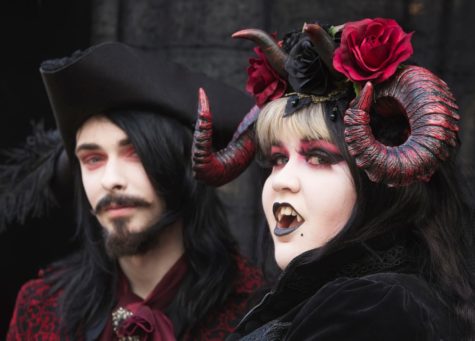 Whitby Goth Weekend is an alternative music festival held in Whitby. The event consists of two nights of live bands  at the town’s largest venue, The Spa Pavilion, and three days of alternative trade stalls at the Spa Pavilion, Whitby Leisure Centre, and Whitby Brunswick Centre.

The festival was held yearly until 1997, when it became twice-yearly in April and October. It has grown into one of the world’s most popular goth music events attracting around 1,500+ attendees from across the UK and beyond. The term “Whitby Goth Weekend” is sometimes used as a generic term to describe events during the week in Whitby as a whole, although the name of the event and its associated logo are registered trademarks of Jo Hampshire of Top Mum Promotions. 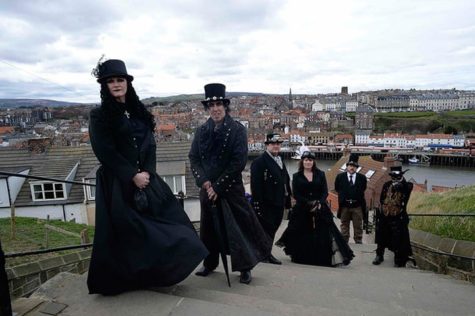 The main event is held in the town’s largest venue Whitby Spa Pavilion (known as the Spa) and the Bizarre Bazaar ‘Goth Market’ is also held there and at Whitby Leisure Centre and the Brunswick Centre. Access to the Spa in the evening requires a ticket and live bands play on both Friday and Saturday from 08:00 until about midnight.

The “weekend” starts during the day on Friday and fringe events are held on Thursday, Sunday and Monday including club nights, markets, and a charity football match between visiting goth team Real Gothic, and local team Stokoemotiv Whitby.

During the October/November event there is an independent custom car show, ‘Whitby Kustom’ in the grounds of West Cliff School. There are also several “meet ups” aimed at goths with a particular interest, e.g. Lolita Goth.

Newbies who have not attended the event before are referred to as “Whitby Virgins”. To help introduce them to the event, there was a WGW Virgins Meet Up on the Friday morning at the Spa until about 2014. 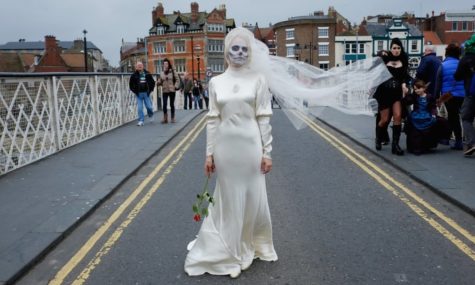 In the mid-2000s the October weekend on or near Halloween began to attract large numbers of non-goths in Halloween, horror, historical, fantasy and sci-fi costume, which has led to an increase in photographers and visitors. The weekend now attracts other alternative subcultures, including Victorian vampires, rockers, punks and members of the steampunk subgenre.

Some regulars consider it no longer a purely “Goth” weekend, and it was acknowledged by Hampshire in the 2014 Whitby Goth Weekend Guide that in order to survive the event would have to diversify into other areas that have influenced Goth. 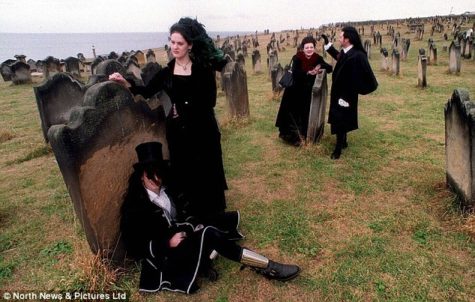 Concerns have grown about disrespect being shown to the graves in St. Mary’s Churchyard by photographers using them for photographic purposes which has resulted in a petition to have the area closed during the event, an action that Whitby Goth Weekend fully supports. The Bram Stoker Film Festival, which also took place in the town, rehashed a proposal to build a film set graveyard which photographers would be charged to use.

Promote Your Page Too
Bread Crumbs
A trail of bread crumbs in case you lose your way wandering through this site ... Pagan Calendar > Blog Page > April > Whitby Goth Weekend