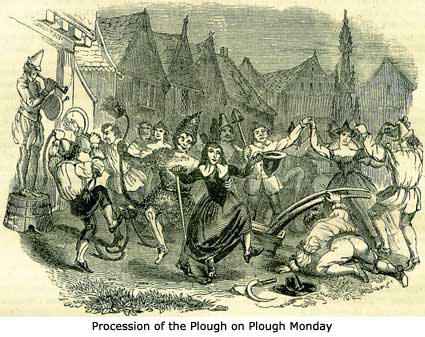 In Belgium, the Monday after Epiphany is called “lost Monday” and is a day of universal idleness. Hence probably has arisen the custom, not confined, however, to Belgian workmen alone, of idling every Monday or as they call it “making blue Monday.”

Plough-Monday is the first Monday after Twelfth Day (6th of January), so the date varies from year to year. It is so called because, the Christmas holidays being over, the men return to their plough or daily work. It was customary on this day for farm laborers to draw a plough—called “white” on account of the mummers being dressed in white, gaudily trimmed with flowers and ribbons—through the parish, soliciting “plough-money,” which would be spent in a frolic. The queen of the feast was called Bessy. The plough was also called “fond” or “fool,” because the procession is fond or foolish, not serious nor of a business character.

Dressed in clean white smocks decorated with ribbons, the men dragged a plow (plough) through the village and collected money for the “plow light” that was kept burning in the church all year. Often men from several farms joined together to pull the plow through all their villages. They sang and danced their way from village to village to the accompaniment of music. In the evening, each farmer provided a Plough Monday supper for his workers, with plentiful beef and ale for all.

Some accounts depict something far more like Hallowe’en or carnival—men going door to door in outlandish disguise, singing and demanding a gift, and if they were given nothing, ploughing up the front garden. It seems likely that the original rite, like many such door-to-door seasonal processions, had both aspects—the plough was processed because it brought blessings, but ribaldry attended the celebrations and lack of respect for the plough and its attendants brought retribution. I assume the plough was blessed first, before being taken around.

Found in: Encyclopaedia of Superstitions

Promote Your Page Too
Bread Crumbs
A trail of bread crumbs in case you lose your way wandering through this site ... Pagan Calendar > Blog Page > January > Plough Monday