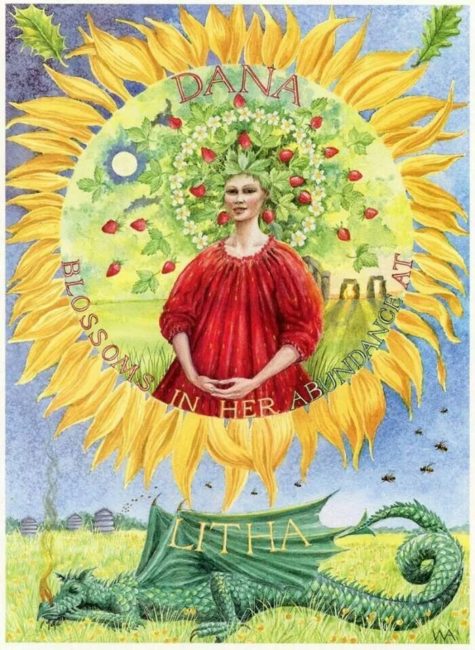 Litha (pronounced “LITH-ah”) is one of the Lesser Wiccan Sabbats and is usually celebrated on June 21st, but varies somewhat from the 20th to the 23rd, dependent upon the Earth’s rotation around the Sun (check the calendar).

According to the old folklore calendar, Summer begins on Beltane (May 1st) and ends on Lughnassadh (August 1st), with the Summer Solstice midway between the two, marking MID-Summer. This makes more logical sense than suggesting that Summer begins on the day when the Sun’s power begins to wane and the days grow shorter.

Wiccans consider the Goddess to be heavy with pregnancy from the mating at Beltane – honor is given to Her. The Sun God is celebrated as the Sun is at its peak in the sky and we celebrate His approaching fatherhood – honor is also given to Him. The faeries abound at this time and it is customary to leave offerings – such as food or herbs – for them in the evening.

The cycle of fertility has been expressed in many god-forms. One pair of these – which has persisted from early Pagan times to modern folklore – is that of the Oak King and the Holly King, Gods respectively of the Waxing Year and the Waning Year. The Oak King rules from Midwinter to Midsummer – the period of Fertility, Expansion and Growth; while the Holly King reigns from Midsummer to Midwinter – the period of Harvest, Withdrawal and Wisdom.

They are the light and dark twins, each being the other’s alternate self, thus being one. Each represents a necessary phase in the natural rhythm, therefore both are good. At the two changeover points, they symbolically meet in combat. The incoming twin – the Oak King at Midwinter, the Holly King at Midsummer – “slays” the outgoing one. But the defeated twin is not actually considered dead – he has merely withdrawn during the six months of his brother’s rule.

On Midsummer Night, field and forest elves, sprites, and fairies abound in great numbers – making this a great time to commune with them. Litha is considered one of the best times to perform magicks of all kinds, for it is considered a time of great magickal power. Especially effective magick and spells at this time include the performance of those for love, healing and prosperity. A wreath can be made for your door with yellow feathers for prosperity and red feathers for sexuality – intertwined and tied together with ivy.

This is also a very good time to perform blessings and protection spells for your pets or other animals. You may want to choose to include your pet within your cast Circle at this Sabbat celebration, and even present him or her with a special gift (such as a tiny pentacle to attach to his or her collar). I have done this and found it very rewarding and heartwarming.

Nurturing and love are key actions related to Midsummer. If you haven’t yet done so, Litha is a good time to perform your Self-Dedication Ceremony… or – if you have been practicing Wicca for a while – you may choose to perform a simple Re-dedication/Affirmation as a part of your Sabbat celebration. Ritual actions for Litha might include placing a flower-ringed cauldron upon your altar, plunging of the sword (or athame) into the cauldron, balefire leaping (outdoors) and the gathering and drying of herbs. Herbs can be dried over the ritual fire if you’re celebrating outdoors. Leap the bonfire for purification and renewed energy. Ritually, use mirrors to capture the light of the Sun or the flames of the fire.