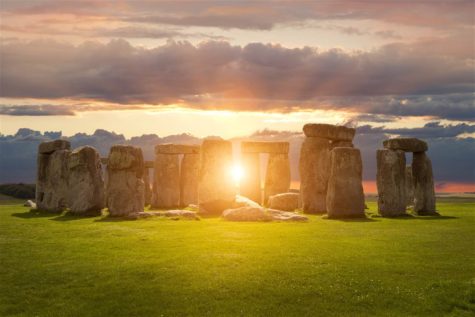 “Solstice” is derived from two Latin words: “sol” meaning sun, and “sistere,” to cause to stand still. This is because, as the summer solstice approaches, the noonday sun rises higher and higher in the sky on each successive day. On the day of the solstice, it rises an imperceptible amount, compared to the day before. In this sense, it “stands still.”

(In the southern hemisphere, the summer solstice is celebrated in December, also when the night time is at a minimum and the daytime is at a maximum.)

Why does the summer solstice happen?

On this day, typically June 21, the daytime hours are at a maximum in the Northern hemisphere, and night time is at a minimum. It is officially the first day of summer. It is also referred to as Midsummer because it is roughly the middle of the growing season throughout much of Europe.

At noontime in the Northern Hemisphere the sun appears high in the sky during summertime, and low during winter. The time of the year when the sun reaches its maximum elevation occurs on the summer solstice — the day with the greatest number of daylight hours. It typically occurs on, or within a day or two of, June 21, the first day of summer. The lowest elevation occurs about Dec 21 and is the winter solstice — the first day of winter, when the night time hours reach their maximum.

Activities for the Summer Solstice:

Promote Your Page Too
Bread Crumbs
A trail of bread crumbs in case you lose your way wandering through this site ... Pagan Calendar > Blog Page > June > June Skies > The Summer Solstice