At the outbreak of the Peloponnesian War, the Athenians allowed the founding of a sanctuary for the Goddess Bendis and shortly afterward created a state festival, the Bendideia, for her.The first celebration was held on the 19th of Thargelion (May–June), 429 BC, at the Piraeus, the seaport of Athens.

Many pagan calendars list June 6th as the modern equivalent date for this festival honoring the Moon Goddess of Thrace. Other sources give that her festivals were held on the full moon preceding or coinciding with the solstice – and if so, the dates would vary from year to year. 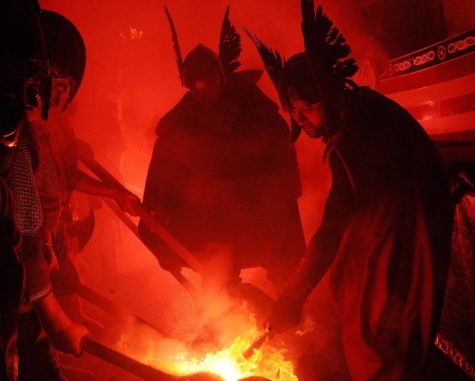 For a description of the festival we have this excerpt of a conversation between Socrates and a friend describing that festival (from Plato’s Republic):

Sokrates: “I went down yesterday to the Peiraios (Piraeus) with Glaukon (Glaucon), the son of Ariston, to pay my devotions to the Goddess [Bendis], and also because I wished to see how they would conduct the festival since this was its inauguration. I thought the procession of the citizens very fine, but it was no better than the show, made by the marching of the Thrakian contingent [i.e. the mercenary force who policed ancient Athens]. After we had said our prayers and seen the spectacle we were starting for town . . . “

‘Do you mean to say,’ interposed Adeimantus, ‘that you haven’t heard that there is to be a torchlight race this evening on horseback in honor of the Goddess?’

‘On horseback?’ said I. ‘That is a new idea. Will they carry torches and pass them along to one another as they race with the horses, or how do you mean?’

‘That’s the way of it,’ said Polemarkhos, ‘and, besides, there is to be a night festival which will be worth seeing. For after dinner we will get up and go out and see the sights and meet a lot of the lads there and have good talk . . . Let this complete your entertainment, Sokrates, at the festival of Bendis.’

Promote Your Page Too
Bread Crumbs
A trail of bread crumbs in case you lose your way wandering through this site ... Pagan Calendar > Blog Page > Greek Festivals > The Bendideia of Bendis