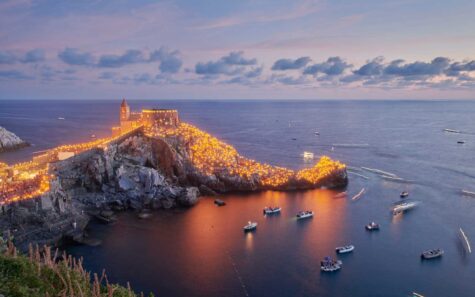 The festival of Nemoralia (aka Festival of Torches) was celebrated by the ancient Romans either on 13–15 August or on the August Full Moon, in honor of the goddess Diana (Diana Nemorensis). This festival was later adopted by Catholics as The Feast of the Assumption.

“In the Arrician valley, there is a lake surrounded by shady forests, Held sacred by a religion from the olden times… On a long fence hang many pieces of woven thread, and many tablets are placed there as grateful gifts to the Goddess. Often does a woman whose prayers Diana answered, With a wreath of flowers crowning her head, Walk from Rome carrying a burning torch… There a stream flows down gurgling from its rocky bed…”

On this day, worshippers would form a shimmering procession of torches and candles around the dark waters of Lake Nemi, Diana’s Mirror. The lights of their candles join the light of the moon, dancing in reflection upon the surface of the water. Today’s festival is held in the Greek fashion.

Hundreds join together at the lake, wearing wreaths of flowers. According to Plutarch, part of the ritual (before the procession around the lake) is the washing of hair and dressing it with flowers. It is a day of rest for women and slaves. Hounds are also honored and dressed with blossoms. Travelers between the north and south banks of the lake are carried in small boats lit by lanterns. Similar lamps were used by Vestal virgins and have been found with images of the Goddess at Nemi.

One 1st century CE Roman poet, Propertius, did not attend the festival, but observed it from the periphery as indicated in these words to his beloved:

“Ah, if you would only walk here in your leisure hours. But we cannot meet today, When I see you hurrying in excitement with a burning torch To the grove of Nemi where you Bear light in honour of the Goddess Diana.” 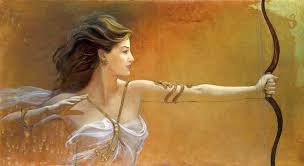 Requests and offerings to Diana may include: small written messages on ribbons, tied to the altar or to trees; small baked clay or bread statuettes of body parts in need of healing; small clay images of mother and child; tiny sculptures of stags; dance and song; and fruit such as apples.

In addition, offerings of garlic are made to the Goddess of the Dark Moon, Hecate, during the festival. Hunting or killing of any beast is forbidden on Nemoralia.

Promote Your Page Too
Bread Crumbs
A trail of bread crumbs in case you lose your way wandering through this site ... Pagan Calendar > Blog Page > August > Festival of Torches