The Festival of the Tooth

The Festival of the Tooth – An extended and lavish holiday which commemorates a holy relic of Buddha, his eye tooth. 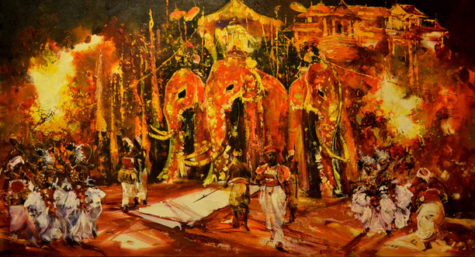 Kandy is a beautiful city in Sri Lanka. On a small hill is a great temple which was especially built to house a relic of the Buddha – his tooth. The tooth can never be seen, as it is kept deep inside may caskets. But once a year in August, on the night of the full moon, there is a special procession for it. But other festivities occur on ten days leading to that final day.

The dates of the festival vary from year to year. In 2017, the festival runs from July 29 thru August 8th. The Festival begins with the cutting of a sanctified young jack tree. Branches of the tree are then planted near the shrines of the four guardian gods Natha (a Buddhist savior), Vishnu (for safeguarding Buddhism in Sri Lanka), Kataragama (protector of the south) and the goddess Pattini (goddess of health and fertility). Traditionally, this was a ritual performed to ask the gods for blessings on the King and the people. 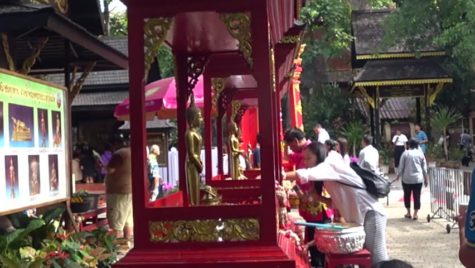 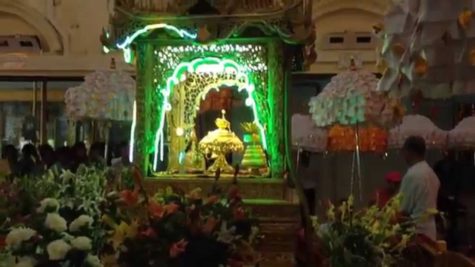 For the next five nights, festive dancing and drumming are held outside each of the temples. On the sixth night of the festival, processions begin from each shrine and parade toward the Temple of the Tooth. The processions get longer and more magnificent for the next three nights. 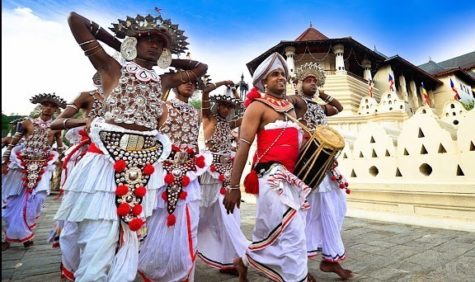 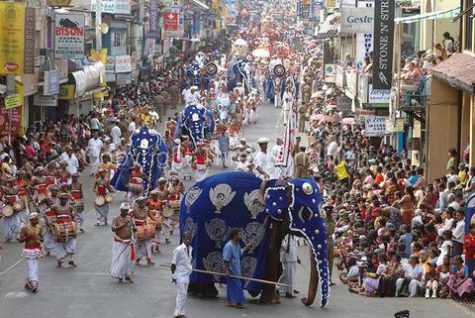 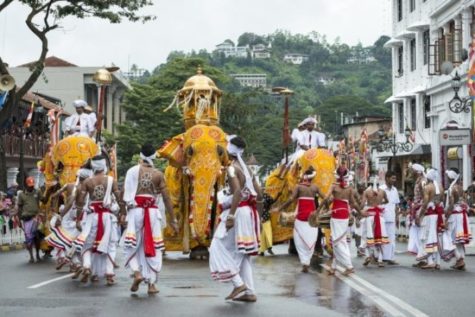 The highlight is on the last night of the processions: an enormous elephant carries a gold casket containing a replica of the Tooth Relic as the drummers and dancers enthrall the crowd along the route. The drummers and dancers themselves are followed by elephants and other groups of musicians, dancers and flag bearers. 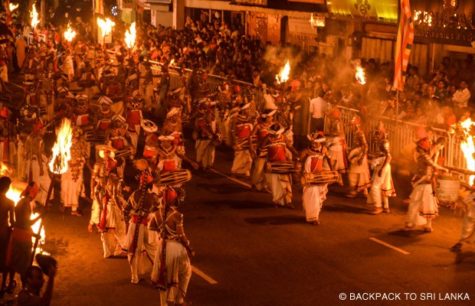 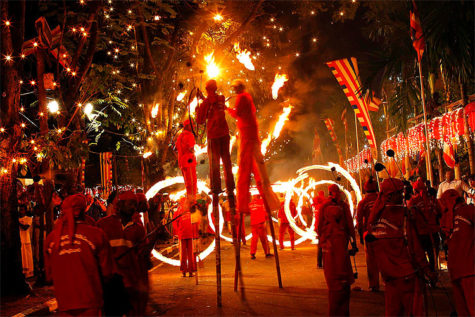 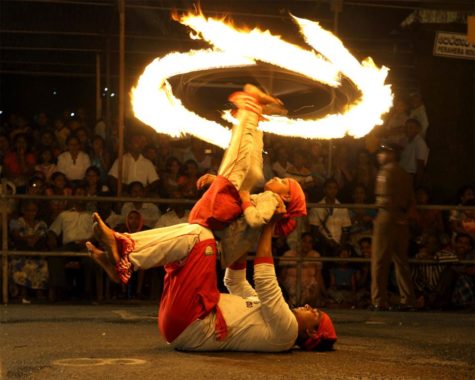 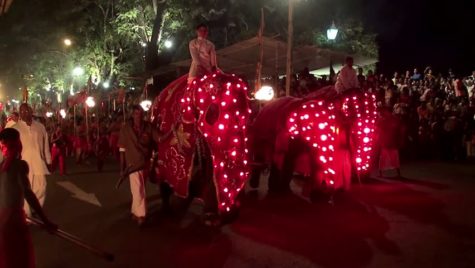 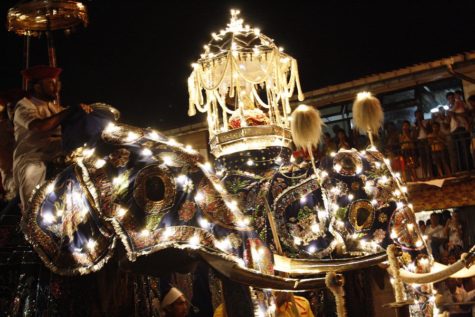 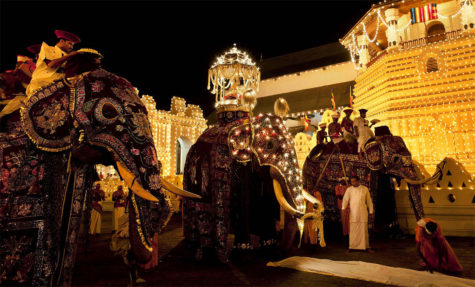 After nights of processions, a water cutting ceremony brings the festival to an end at dawn, when priests representing each of the four temples walk into the Mahaweli River, “cut” a circle in the water with a sword and fill pitchers with water from within the circle. The water is kept till the next year’s Esala Perahera, when the pitcher will be freshly filled again. 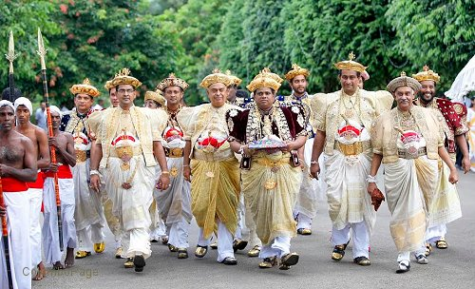 The next day, Kandyan chieftains in ancient regalia, march to the Presidential mansion in Kandy, following royal tradition, to report to the Head of State, the successful completion of the annual event.

The story behind the tooth is as follows:

It was believed that if the Bodhi Tree that came into contact with the Buddha had the power to bring rains, then the parts of His own body had much greater power to invite rains. With this in mind, the sacred tooth relic was brought all the way from Kalinga in India to the island of Sri Lanka in the fourth century AD. At the time, the sacred tooth relic was brought to Sri Lanka, the king was Sri Megha varna. His name itself meant ‘the Resplendent one whose complexion is that of the Rain-cloud’. 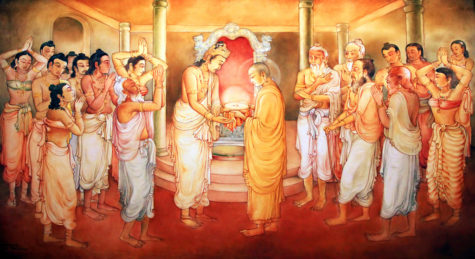 The time when the sacred tooth was brought to Sri Lanka was around six centuries after the sapling of the sacred Bodhi Tree was brought into the island country. However, very soon, the popularity of the sacred tooth surpassed that of the Bodhi Tree. The simple reason for this was that it could be moved any number of times from one place to another, very unlike the Bodhi Tree itself. Also, the possesion of the tooth relic soon became a matter of power and claim to rule the land. The king who had possession of the tooth relic had the authority to rule the land and, wars were fought to keep the relic from falling into hostile hands.

This is amply manifested in the attempt made by the kings when the Europeans enhanced their power in the island country. King Senarath quickly transported the relic a little distance away from Kandy when the Portuguese came to close for his comfort. Later, the significance of the tooth relic became known to the Europeans themselves. They wasted no time and made it their primary goal to get hold of the precious relic. The British succeeded in 1818, and the people themselves gave up all efforts to prevent the former from ruling them, all because the British possessed the tooth relic. 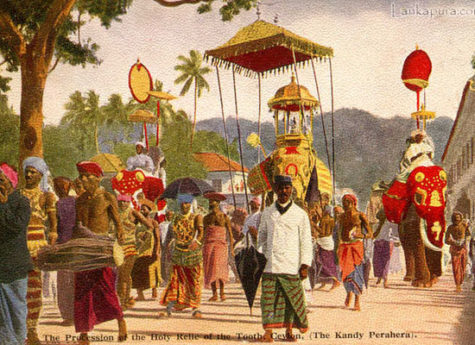 Historically, a number of festivals were celebrated to honor the sacred tooth relic right from time it came to Sri Lanka. Initially, processions or peraheras were taken out for the tooth relic alone. However, later, the festival was incorporated with another festival meant to appease the rain god, the Esala peraheras. At this time, a Kandyan king, Kirti Shri Rajasinghe was in power and he made it possible for the common people to worship the relic by announcing that it would be taken out in a procession for the masses to see and offer their prayers. Before this, the tooth relic was the property of the king and the common people were not allowed to worship it.

Source: Wikipedia and My Odyssey Tours

3 Responses to The Festival of the Tooth

Promote Your Page Too
Bread Crumbs
A trail of bread crumbs in case you lose your way wandering through this site ... Pagan Calendar > Blog Page > August > The Festival of the Tooth