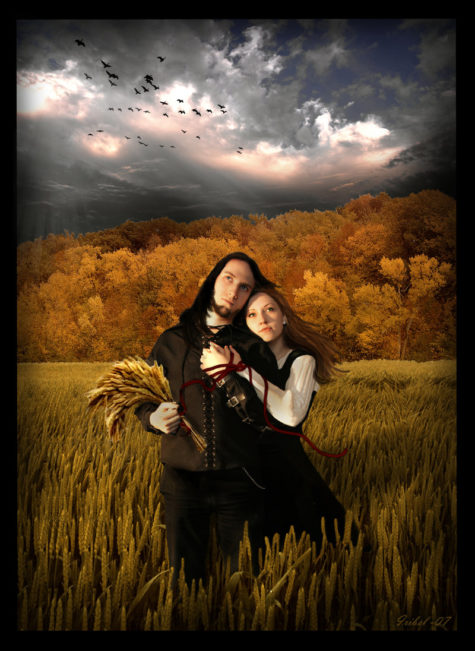 Lughnasadh (pronounced “LOO-nahs-ah”) aka Lammas, is one of the Greater Wiccan Sabbats and is usually celebrated on August 1st or 2nd, although occasionally on July 31st. The Celtic festival held in honor of the Sun God Lugh (pronounced “Loo”) is traditionally held on August 7th. Some Pagans celebrate this holiday on the first Full Moon in Leo.

Other names for this Sabbat include the First Harvest Festival, the Sabbat of First Fruits, August Eve, Lammastide, Harvest Home, Ceresalia (Ancient Roman in honor of the Grain Goddess Ceres), Feast of Bread, Sabbat of First Fruits, Festival of Green Corn (Native American), Feast of Cardenas, Cornucopia (Strega), Thingtide and Elembiuos. Lughnassadh is named for the Irish Sun God Lugh (pronounced Loo), and variant spellings for the holiday are Lughnassadh, Lughnasad, Lughnassad, Lughnasa or Lunasa. The most commonly used name for this Sabbat is Lammas, an Anglo-Saxon word meaning “loaf-mass”.

At Lammas, the hot days of August are upon us, much of the earth is dry and parched, but we still know that the bright reds and yellows of the harvest season are just around the corner. Apples are beginning to ripen in the trees, our summer vegetables have been picked, corn is tall and green, waiting for us to come gather the bounty of the crop fields. Now is the time to begin reaping what we have sown, and gathering up the first harvests of grain, wheat, oats, and more.

It’s the dog days of summer, the gardens are full of goodies, the fields are full of grain, and the harvest is approaching. Take a moment to relax in the heat, and reflect on the upcoming abundance of the fall months. At Lammas, sometimes called Lughnasadh, it’s time to begin reaping what we have sown throughout the past few months, and recognize that the bright summer days will soon come to an end.

Depending on your individual spiritual path, there are many different ways you can celebrate Lammas, but typically the focus is on either the early harvest aspect, or the celebration of the Celtic god Lugh. It’s the season when the first grains are ready to be harvested and threshed, when the apples and grapes are ripe for the plucking, and we’re grateful for the food we have on our tables.

Lammas is a time of excitement and magic. The natural world is thriving around us, and yet the knowlege that everything will soon die looms in the background. This is a good time to work some magic around the hearth and home.

This is also a time when the God mysteriously begins to weaken as the Sun rises farther in the South, each day grows shorter and the nights grow longer. The Goddess watches in sorrow as She realizes that the God is dying, and yet lives on inside Her as Her child. It is in the Celtic tradition that the Goddess, in her guise as the Queen of Abundance, is honored as the new mother who has given birth to the bounty; and the God is honored as the God of Prosperity.

Deities associated with Lughnassadh are all Grain and Agriculture Deities, Sun Gods, Mother Goddesses and Father Gods. Particular emphasis is placed on Lugh, Demeter, Ceres, the Corn Mother and John Barleycorn (the personification of malt liquor).

Activities appropriate for this time of the year are:

Other actions include the gathering of first fruits and the study of Astrology. Some Pagans symbolically throw pieces of bread into a fire during the Lammas ritual. Spellwork for prosperity, abundance and good fortune are especially appropriate now, as well as spells for connectedness, career, health and financial gain.

The celebration of Lammas is a pause to relax and open yourself to the change of the Season so that you may be one with its energies and accomplish what is intended. Visits to fields, orchards, lakes and wells are also traditional. It is considered taboo not to share your food with others.

It is also appropriate to plant the seeds from the fruit consumed in ritual. If the seeds sprout, grow the plant with love and as a symbol of your connection to the Divine. A cake is sometimes baked, and cider is used in place of wine.

Key actions associated with Lammas are receiving and harvesting, honoring the Parent Deities, honoring the Sun Gods and Goddesses, as well as celebration of the First Harvest.

From: PaganWiccan and other sources,

Promote Your Page Too
Bread Crumbs
A trail of bread crumbs in case you lose your way wandering through this site ... Pagan Calendar > Blog Page > August > Lughnasadh aka Lammas