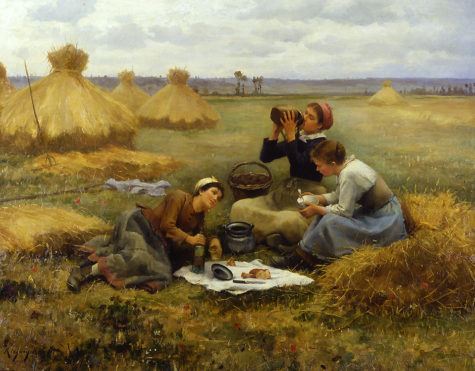 Lammas and Lughnasadh are ancient Pagan festivals celebrated in many parts of the world. Typically falling on the first day of August, these festivals celebrate the fruits of the first harvest of the year with a focus upon gratitude and blessings for abundance. The names Lammas and Lughnasadh are often used interchangeably which can create some confusion but the following will help to clear things up.

Lughnasadh, which is pronounced LOO-nah-sah, traces its roots far back into Irish history. In Celtic mythology the god Lugh is said to have held a funeral feast in honor of his foster mother Tailtiu, who died after clearing the plains of Ireland for the purpose of agriculture.

The festival of Lughnasadh became a day based upon this Celtic myth and historically it was a day of contests, games, handfasting or marriage, and seeking lodging for the long winter months. It was also one of the four main festivals of the Irish medieval calendar signaling the height of summer and the approach of autumn. The word Lughnasadh means “marriage of Lugh” which again ties in with Celtic mythology, for the god Lugh was seen as married to the land, or earth, and sacrificed to the earth. This is symbolic of crops being planted and then “sacrificed” in harvest.

Many modern-day Pagans celebrate the festival of Lughnasadh in a variety of ways, depending upon the Pagan tradition that they follow and their personal preferences. In Wicca, Lughnasadh is viewed as one of the eight sabbats that make up the Wheel of the Year. In Dianic Wicca often focus primarily upon the Goddess aspect in the form of the Goddess of plenty, Kore and Ceres or Habondia.

Celtic Reconstructionists base the celebrations of Lughnasadh largely upon historical research of the polytheist beliefs of the ancient Celts and typically celebrate it on the day of the full moon that falls closest to the festival. They often recognize the day by giving thanks and asking the deities to grant them a bountiful harvest. Many Celtic Reconstructionists will also honor the goddess Tailtiu on this day.

Lammas was the name used in medieval England for the Christian holiday that celebrated early harvest. An Anglo-Saxon word, Lammas is thought to be a combination of the words loaf mass, the reason being that in medieval times it was typical for loaves of bread baked from the grains of the first harvest to be blessed during a church ceremony at that time.

However, Lammas was originally a Pagan harvest festival that, like Lughnasadh was one of gratitude and celebrating the first grains of harvest even though, in some parts of the world, it was incorporated into the Christian church.

Today Lammas is viewed primarily as a Pagan festival and many modern-day Pagans view Lammas and Lughnasadh as the same thing although the history behind each of the names is slightly different.

Promote Your Page Too
Bread Crumbs
A trail of bread crumbs in case you lose your way wandering through this site ... Pagan Calendar > Blog Page > August > Lammas vs Lughnasadh