Lammas – A Feast of Bread 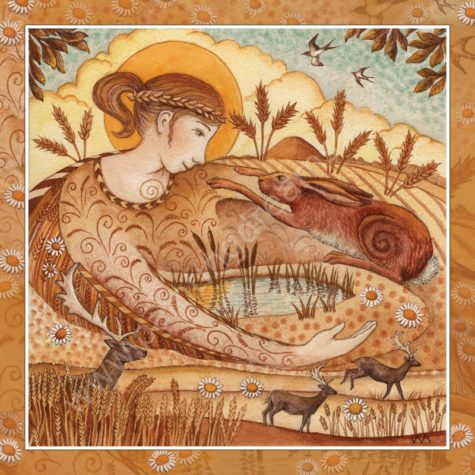 Lammas is very old indeed. It derives from the ancient English festival the Gule of August, which marked the beginning of the harvest, traditionally August 1.

The early English church kept this pagan dedication of the first fruits but converted it to Christian usage. The word Lammas derives from the Old English phrase hlaf-maesse, which translates to loaf mass. In early Christian times, the first loaves of the season were blessed by the Church.

Through the centuries, “loaf-mass” became corrupted in spelling and pronunciation to Lammas. On Lammas Day, loaves of bread were baked from the first-ripened grain and brought to the churches to be consecrated.

To the Celts, this was Lughnasaid, the feast of the wedding of the Sun god and the Earth goddess, and also a harvest festival. In Ireland, baskets of blueberries are still offered to a sweetheart in commemoration of the original fertility festival. In Scotland, the Lammastide fairs became famous for trial marriages that could be ended without question after a year.

“After Lammas Day, corn ripens as much by night as by day.”

In early Ireland, it was a bad idea to harvest your grain any time before Lammas – it meant that the previous year’s harvest had run out early, and that was a serious failing in agricultural communities. However, on August 1, the first sheaves of grain were cut by the farmer, and by nightfall his wife had made the first loaves of bread of the season.

Bread is the ultimate symbol of the Lammas season. After all, once the grain is harvested, it is milled and baked into bread, which is then consumed. It is the cycle of the harvest come full circle. The spirit of the grain god lives on through us in the eating of the bread. In many traditions, a loaf of special bread is baked in the shape of a man, to symbolize the god of the harvest.

You can easily make a loaf of Lammas bread by using a pre-made loaf of bread dough, found in the frozen food section in your grocery store. Certainly, you can make your own dough, but if you’re not much of a baker, this is an easy alternative. Or, if you prefer to make your own, here’s a recipe: Lammas Bread

Promote Your Page Too
Bread Crumbs
A trail of bread crumbs in case you lose your way wandering through this site ... Pagan Calendar > Blog Page > August > Lammas – A Feast of Bread