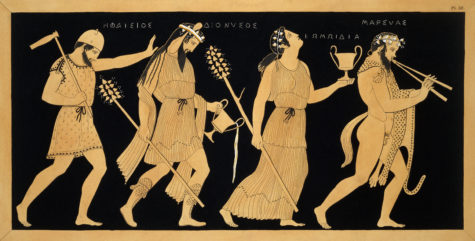 The Dionysia was originally a rural festival in Eleutherae, Attica, probably celebrating the cultivation of vines. It was probably a very ancient festival, perhaps not originally associated with Dionysus. This “rural Dionysia” was held during the winter, in the month of Poseideon (the month straddling the winter solstice, Dec – Jan).

The central event was the procession (pompe), in which a symbol of the phallos, sign of fertility, was carried through the dancing and singing procession. Young girls carried baskets, others carried long loaves of bread and other offerings, also carried in the procession were jars of water and wine. The pompe ended with a sacrifice consisting of baked bread or a gruel of cereal.

After the pompe procession was completed, there were contests of dancing and singing, and choruses (led by a choregos) would perform dithyrambs. Some festivals may have included dramatic performances, possibly of the tragedies and comedies that had been produced at the City Dionysia the previous year. This was more common in the larger towns, such as Piraeus and Eleusis. Generally, it was a joyful festival, shared by all, even the slaves.

Because the various towns in Attica held their festivals on different days, it was possible for spectators to visit more than one festival per season. It was also an opportunity for Athenian citizens to travel outside the city if they did not have the opportunity to do so during the rest of the year. This also allowed travelling companies of actors to perform in more than one town during the period of the festival.

The City Dionysia. also known as the Great Dionysia, was the urban part of the festival, possibly established in the 6th century BC. This festival was held probably from the 10th to the 16th of the month Elaphebolion (the lunar month straddling the vernal equinox, Mar – Apr in the solar calendar), three months after the rural Dionysia, probably to celebrate the end of winter and the harvesting of the year’s crops.

Ways to celebrate in modern times:

Sing, dance, play games, attend or participate in a parade or comedic theater of some sorts. Create phallic-shaped cakes for consumption and sacrifice. Read The Archanians by Aristophanies, which provides a glimpse of the festival. Display images and symbols of the God. Recite Orphic Hymns, Homeric Hymns, (all to Dionysos), or even hymns of your own creation.

I celebrate the Rural Dionysia following immediately the Heliogenna lasting through January 1. I pack baskets with gifts of nuts, wine, silly games and gifts, and DVD’s of comedies. Then I deliver those baskets, not more than one a day or evening, to friends and family. I spend the evening with the basket recipient and we eat the snacks, watch the DVDs, and drink the wine.

We also play the silly games and laugh. You don’t have to give the DVDs, you could just bring over a bottle of wine and a DVD from your collection or a netflix. That’s how I celebrate it since that is pretty close (in spirit) to what the Rural Dionysia was all about.  – Cara Schulz 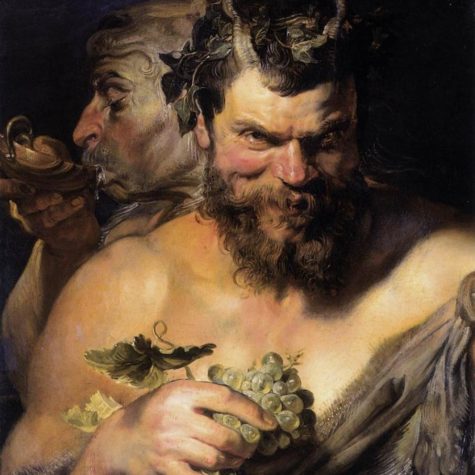 Bacchus I call, loud-sounding and divine, fanatic God, a two-fold shape is thine: Thy various names and attributes I sing, O, first-born, thrice begotten, Bacchic king: Rural, ineffable, two-form’d, obscure, two-horn’d, with ivy crown’d, euion, pure. Bull-fac’d, and martial, bearer of the vine, endu’d with counsel prudent and divine: Triennial, whom the leaves of vines adorn, of Jove and Proserpine, occultly born. Immortal dæmon, hear my suppliant voice, give me in blameless plenty to rejoice; And listen gracious to my mystic pray’r, surrounded with thy choir of nurses fair.

Liknitan Bacchus, bearer of the vine, thee I invoke to bless these rites divine: Florid and gay, of nymphs the blossom bright, and of fair Venus, Goddess of delight, ‘Tis thine mad footsteps with mad nymphs to beat, dancing thro’ groves with lightly leaping feet: From Jove’s high counsels nurst by Proserpine, and born the dread of all the pow’rs divine: Come, blessed pow’r, regard thy suppliant’s voice, propitious come, and in these rites rejoice.

Bacchus Pericionius, hear my pray’r, who mad’st the house of Cadmus once thy care, With matchless force, his pillars twining round, (when burning thunders shook the solid ground, In flaming, founding torrents borne along), propt by thy grasp indissolubly strong. Come mighty Bacchus to these rites inclin’d, and bless thy suppliants with rejoicing mind.

Of ivy-tressed uproarious Dionysus I begin to sing, the splendid son of Zeus and renowned Semele.  Him did the fair-tressed nymphs foster, receiving him from the king and father in their bosoms, and needfully they nurtured him in the glens of Nysê.  By his father’s will he waxed strong in the fragrant cavern, being numbered among the Immortals.  Anon when the Goddesses had bred him up to be the god of many a hymn, then went he wandering in the woodland glades, draped with ivy and laurel, and the nymphs followed with him where he led, and loud rang the wild woodland.  Hail to thee, then, Dionysus of the clustered vine, and grant to us to come gladly again to the season of vintaging, yea, and afterwards for many a year to come.

Promote Your Page Too
Bread Crumbs
A trail of bread crumbs in case you lose your way wandering through this site ... Pagan Calendar > Blog Page > Greek Festivals > The Rural Dionysia