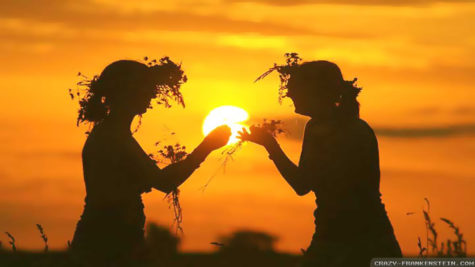 People believed that mid-summer plants had miraculous and healing powers and they therefore picked them on this night. Bonfires were lit to protect against evil spirits which were believed to roam freely when the sun was turning southwards again.

The solstice itself has remained a special moment of the annual cycle of the year since Neolithic times. These ancient observances were not on the day as we define it – at midnight or at dawn. Instead the celebrations began on the pre-Christian beginning of the day, which falls on the previous evening.

More about these summer celebrations can be found here:

Promote Your Page Too
Bread Crumbs
A trail of bread crumbs in case you lose your way wandering through this site ... Pagan Calendar > Blog Page > June > Midsummer’s Eve