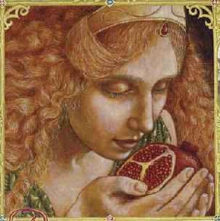 About Kore: An aspect of Persephone before her marriage to Hades, this youthful goddess motivates good fortune, zeal, and a closer affinity to earth’s cycles during the coming months.

Kore, whose name means “maiden,” is the youngest aspect of the triple goddess. She was the daughter of Zeus and Demeter, as beautiful as spring’s blossoms and as fragrant as its breezes. It was this beauty that inspired Hades to tempt her with a pomegranate, a symbol of eternal marriage. Because she ate the fruit, Persephone spends winter with Hades as his wife and returns to the earth in spring.

To Do Today (Jan 5 or 6): Traditionally, on this day the Greeks carried an image of Kore around the temple seven times for victory, protection, and good fortune. Since your home is your sacred space, consider walking clockwise around it seven times with any goddess symbol you have (a round stone, vase, or bowl will suffice). As you go, visualize every nook and cranny being filled with the yellow-white light of dawn, neatly chasing away any lingering winter blues.

This day marks winter’s passage and perpetuates Kore’s gusto and luck in your home year-round. Also consider carrying a little unpopped popcorn in your pocket to keep Kore’s zeal and vigor close by for when you need it.

Other Rites of Kore: Epiphanius (fourth century), gives an account of a rite held at Alexandria on the night of January 5-6.

In the temple of Kore – the Maiden (Persephone) – he tells us, worshipers spent the night in singing and flute-playing, and at cockcrow brought up from a subterranean sanctuary a wooden image seated naked on a litter. It had the sign of the cross upon in gold in five places – the forehead, the hands, and the knees. This image was carried seven times round the central hall of the temple with flute-playing, drumming, and hymns. It was said: “To-day, at this hour, hath Kore (the Maiden) borne the Aeon.” The image was then taken back to the underground chamber.

Courtesy of: 365 Goddess and other sources

Promote Your Page Too
Bread Crumbs
A trail of bread crumbs in case you lose your way wandering through this site ... Pagan Calendar > Blog Page > Greek Festivals > Festival of Kore