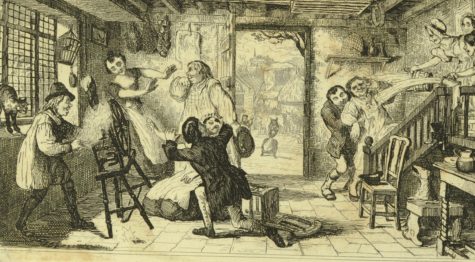 It’s Distaff’s Day (Jan 7th) and time to get back to work after the holidays. (According to Old English tradition, that is.) A distaff is the wooden rod (staff) that holds the flax or wool on a spinning wheel. The term distaff came to refer to both women’s work and the female branch (distaff side) of the family. The women’s husbands did not go back to work until the following Monday (see below), so they would mischievously try to set fire to the flax on their wives’ distaffs, while the women, lying in wait, would douse them with buckets of water.

From Chambers Book of Days, we have this explanation:

As the first free day after the twelve by which Christmas was formerly celebrated, the 7th of January was a notable one among our ancestors. They jocularly called it St. Distaff’s Dag, or Rock Dag, because by women the rock or distaff was then resumed, or proposed to be so. The duty seems to have been considered a dubious one, and when it was complied with, the ploughmen, who on their part scarcely felt called upon on this day to resume work, made it their sport to set the flax a-burning; in requital of which prank, the maids soused the men from the water-pails. 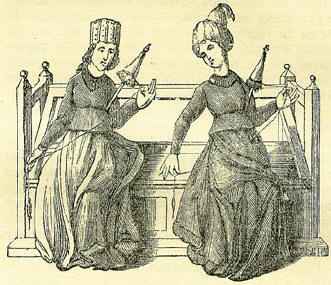 “Partly work and partly play.
Ye must on Saint Distaff’s day;
From the plough soon free the team,
Then come home and fother them;
If the maid a spinning goe,
Burn the flax and fire the towe,
Bring in pails of water then
Let the maids bewash the menne;
Give Saint Distaff all the right
Then bid Christmas sports good-night,
And next morrow every one.
To his own vocation.”

This is an excellent day for spells involving sewing, weaving, mending, and also for practical jokes and family fun. 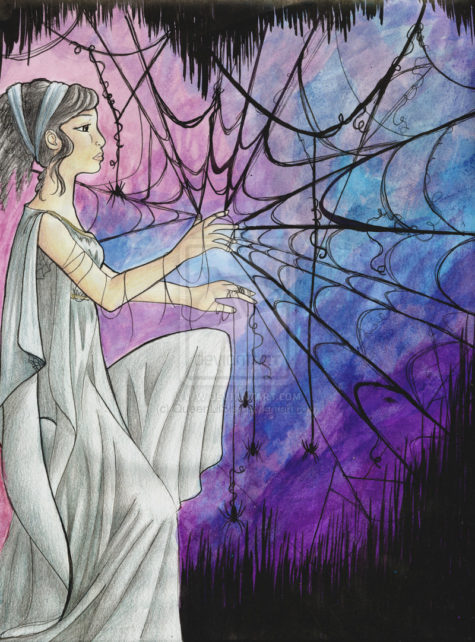 A Ritual for St Distaff Day:

From the book, 365 Goddess, we have some nice ideas for how to celebrate St. Distaff day in a magickal way:

Arachne, the Greek spider goddess, inspires positive changes in your destiny for the new year. Legend tells us that Arachne challenged Athena to a weaving contest and won. In anger, Athena destroyed the girl’s tapestry. Arachne, grief-stricken, took her destiny in hand and turned herself into a spider, but she continues to use her weaving talents to spin and pattern the lives of mortals.

According to lore, Saint Distaff, the patroness of weaving, was a fictional persona made up to mark the resumption of normal activity after the holidays. Instead of this imaginary figure, we turn to Arachne to help us take the strands of our fate in hand and begin weaving a year filled with goddess energy.

To direct your spiritual focus toward the goddess, wear something woven today, or display it proudly. If you have no such items, braid together three strands of thread or yarn, saying:

Arachne, bless this magic braid,
so on you my mind is staid.

Carry this as a charm to keep your thoughts and actions goddess-centered.

Finally, mend any work clothes in need or repairs to improve your job standing. As you make the final knot in a button or hem, bind the magic by saying:

This thread I wind,
The magic bind.

Visualize your professional goals as you work. 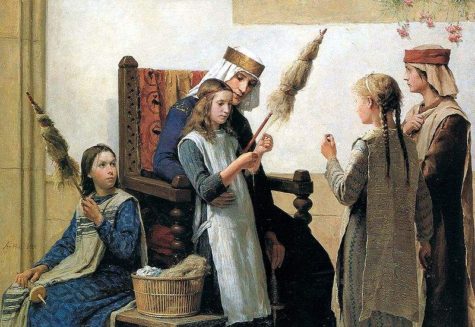 St. Distaff’s Day had no connection whatsoever with any saint but its place in the folk calendar gives an indicator of the importance of spinning at a time when this was the only means of turning the raw wool, cotton or flax into thread capable of being woven into cloth.

The day, which was also known as Rock Day (referring to another name for either the distaff or the spindle) indicated that this was the end of the Christmas festivities and the return to the normality of spinning whenever there was a spare moment.

As Anthony Fitzherbert, wrote in his ‘Boke of Husbandrie’ (1523):

‘it stoppeth a gap…
it saveth a woman from being idle,
and the product was needful’.

Before the invention of the Spinning Wheel, spinning on what is known as the Drop Spindle (a pin or stick weighted by a whorl) was a slow and tedious task. The spinning of one pound of woolen yarn could take about one week and one pound of heavy cotton yarn several weeks to spin.

The method had not changed since the earliest times. There are images from as far back as time of the Ancient Egyptians showing how the distaff was used to hang the flax or tow and the spindle to effect the twisting. The distaff was carried under the arm, and the spindle left dangling and turning in the fingers below, and forming an axis round which to wind parcels of the thread as soon as it was made.

Women of all classes would spin. Everyone from the Lady to the peasant was expected to spend time on the task, though the wealthier may have elaborate spindles. In the evening, after the chores of the day were done, there would be spinning, and the spindle would be taken to visit friends as the task could be undertaken at the same time as a conversation.

Promote Your Page Too
Bread Crumbs
A trail of bread crumbs in case you lose your way wandering through this site ... Pagan Calendar > Blog Page > January > St Distaff Day