Oak Apple Day or Royal Oak Day was a formal public holiday celebrated in England on 29 May to commemorate the restoration of the English monarchy, in May 1660. Parliament declared this to be a public holiday, “to be for ever kept as a day of thanksgiving for our redemption from tyranny and the King’s return to his Government, he entering London that day.”

Traditional celebrations to commemorate the event often entailed the wearing of oak apples or sprigs of oak leaves. , in reference to the occasion after the Battle of Worcester in September 1651, when Charles II escaped the Roundhead army by hiding in an oak tree near Boscobel House.

Anyone who failed to wear a sprig of oak risked being pelted with bird’s eggs or thrashed with nettles. In Sussex, those not wearing oak were liable to be pinched, giving rise to the unofficial name of “Pinch-bum Day”; similarly it was known as “Bumping Day” in Essex. 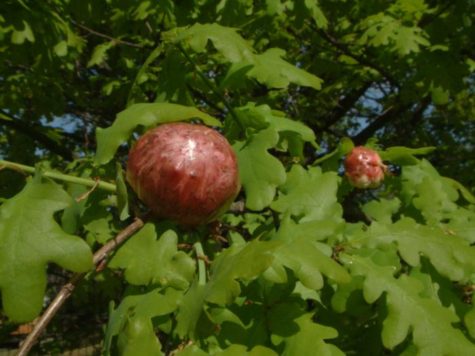 What is an Oak Apple?

An oak apple is a mutation of an oak leaf caused by chemicals injected by the larvae of certain kinds of gall wasp.  It is a type of plant gall, possibly known in some parts of the country as a “shick-shack.”

In Upton Grey, Hampshire, after the church bells had been rung at 6 a.m. the bell-ringers used to place a large branch of oak over the church porch, and another over the lych gate. Smaller branches were positioned in the gateway of every house to ensure good luck for the rest of the year.

These ceremonies, which have now largely died out, are perhaps continuations of pre-Christian nature worship. 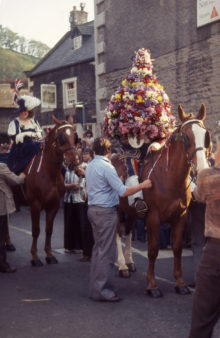 The Garland King who rides through the streets of Castleton, Derbyshire, at the head of a procession, completely disguised in a garland of flowers which is later affixed to a pinnacle on the parish church tower, can have little connection with the Restoration, even though he dresses in Stuart costume.

He is perhaps a kind of Jack in the Green and the custom may have transferred from May Day when such celebrations were permitted again after having been banned by the Puritans.

The public holiday, Oak Apple Day, was formally abolished by the Anniversary Days Observance Act 1859, but the date retains some significance in local or institutional customs.

Events still take place at Upton-upon-Severn in Worcestershire, Aston on Clun in Shropshire, Marsh Gibbon in Buckinghamshire, Great Wishford in Wiltshire (when villagers gather wood in Grovely Wood), and Membury in Devon. The day is generally marked by re-enactment activities at Moseley Old Hall, West Midlands, one of the houses where Charles II hid in 1651.

Fownhope, Hereford have an ongoing tradition in the celebration of Oak Apple Day. The Fownhope Heart of Oak Society organize an annual event, where members of the society gather at the local pub and march through the village holding flower and oak leaf decorated sticks, whilst following the society banner and a brass band. The march goes first to the church for a service, and then to houses who host refreshments.

The Heart of Oak Society was previously a friendly society, but had to reform in 1989 to keep the tradition going. Although Oak Apple Day celebrations have decreased in popularity and knowledge, Fownhope has managed to keep the event going, increasing in popularity and turn-out every year.

At All Saints’ Church, Northampton a statue of Charles II is wreathed at noon every Oak Apple Day, followed by a celebration of the Holy Communion according to the Book of Common Prayer.

At some Oxford and Cambridge colleges a toast is still drunk to celebrate Oak Apple Day.

Oak Apple Day is also celebrated in the Cornish village of St Neot annually. The Vicar leads a procession through the village, he is followed by the Tower Captain holding the Oak bough. A large number of the villagers follow walking to the Church. A story of the history of the event is told and then the Vicar blesses the branch. The Tower Captain throws the old branch down from the top of the tower and a new one is hauled to the top.

Everyone is then invited to the vicarage gardens for refreshments and a barbecue. Up to 12 noon villagers wear a sprig of “red” (new) oak and in the afternoon wear a sprig of “Boys Love” (Artemisia abrotanum); tradition dictates that the punishment for not doing this results in being stung by nettles.

Posted in May | Tagged England, Trees

Promote Your Page Too
Bread Crumbs
A trail of bread crumbs in case you lose your way wandering through this site ... Pagan Calendar > Blog Page > May > Oak Apple Day