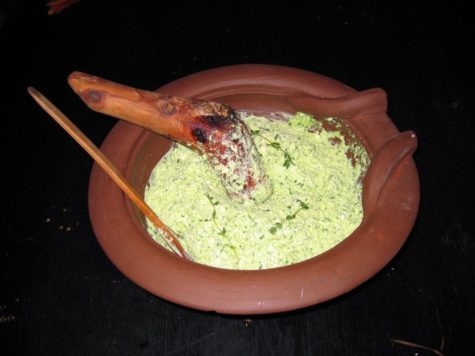 Our recipe this week is straight out of the pages of Roman literature. Moretum is a delicious spread similar to our pesto—and the Roman poet Virgil was apparently a big fan!

The word “moretum” is Latin and is usually translated as “salad,” but that’s not really an accurate translation. It’s not a salad at all, at least not what we think of as salad in modern times. It’s a sort of spread or dip. Virgil is most often credited with the recipe. In his poem entitled “Moretum” he tells the story of Symilus, a peasant farmer, who is making his morning meal. He first makes the bread, but quickly realizes he has no meat to go along with the crusty creation. Concerned that man cannot survive on bread alone, he decides to make an accompaniment for his baked good. Virgil then describes the process by which Symilus makes his moretum. Both the bread and moretum-making are described in detail in the poem, but here is a little summary of the important moretum highlights, courtesy of Pass the Garum blog:

There are a couple of things about this recipe we will not be replicating in the recipe below. For one thing, there is an awful lot of garlic. We’re going to tone that down a bit, but feel free to pile it on if you’re a garlic fan. The Romans loved garlic. They believed it increased “strength and endurance” and so it was fed to “soldiers and sailors.”

It was also believed to “clean the arteries” and guard against toxins and infections. Today we know that garlic is often effective in treating and preventing many different ailments including, but not limited to, blood and heart conditions, some types of cancer, diabetes and even the common cold and flu.

More important than the potential overuse of garlic, rue is poisonous. However, rue is not altogether bad. In fact, it contains alkaloids that made it a useful treatment for indigestion during this time period (1st century BCE). But it also strongly influences the female menstrual cycle so pregnant women should definitely not consume it. We chose a recipe that leaves it out altogether.

Now that we’ve explored some history and cut out the dangerous ingredients, it’s time for a pesto party! Bake (or buy) a loaf of delicious bread to eat with your moretum and have some friends over for a night of Roman cuisine. 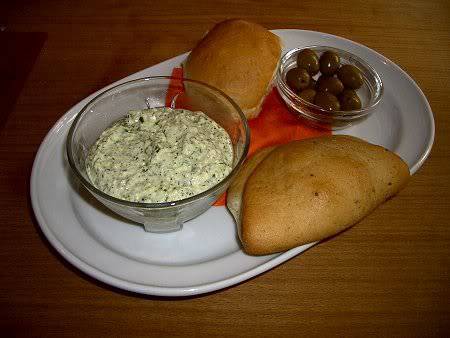 Peel the garlic, add to the mortar and grind.

Add the salt, the cheese and the celery to the mortar and mash them up too. Really make sure to mix them well with the garlic from earlier.
To this paste, add the coriander seeds, parsley, oil and vinegar. I find that it is helpful to add the parsley in batches and break it down bit by bit rather than trying to do it all at once and making a mess. Test for flavor – if it is too garlicky, add more parsley.

Grab some bread and dip or spread ‘til your heart’s content!