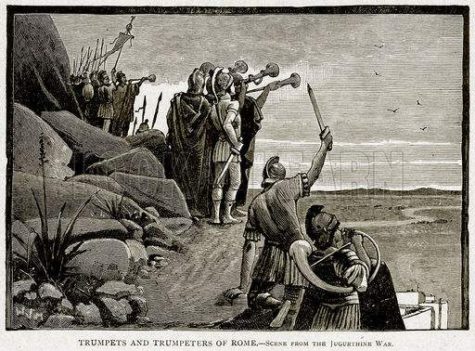 The month of March was the traditional start of the campaign season, and the Tubilustrium was a ceremony to make the army fit for war. It was held on March 23, the last day of the Greater Quinquatrus (the festival of Mars and Minerva), and it occurred again on May 23.

The sacred trumpets (tubae) were originally war trumpets, but later they were used for ceremonial occasions. It is not clear if the army was involved, or if it was merely a ceremony to purify the trumpets used in summoning the assembly on the following day.

The ceremony was held in Rome in a building called the Hall of the Shoemakers (atrium sutorium) and involved the sacrifice of a ewe lamb. Romans who did not attend the ceremony would be reminded of the occasion by seeing the Salii dancing through the streets of the city.

Promote Your Page Too
Bread Crumbs
A trail of bread crumbs in case you lose your way wandering through this site ... Pagan Calendar > Blog Page > March > The Tubilustrium