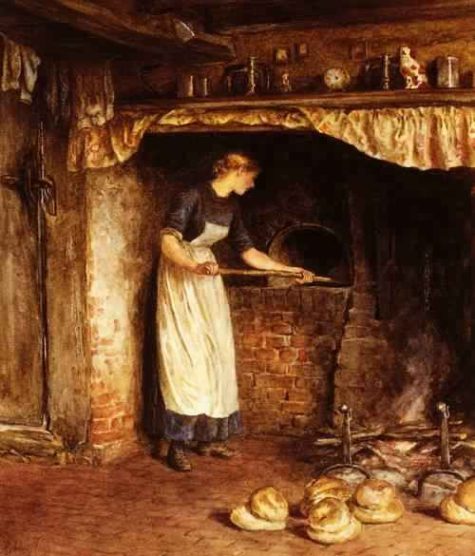 The Fornacalia, a festival in honor of Fornax, the goddess of furnaces, was held in order that bread might be properly baked, and to bless the ovens used to dry grain. This festival was movable, and could have been held any time between Febuary 5th to February 17th.

Each year the Curio Maximus (a citizen charged with ensuring the observance of curial religious feasts) would announce the date of the Fornacalia and post a separate notice for each curia (neighborhood) in the Forum, probably indicating where each curia should gather for the final part of the celebration.

It is believed that every family in the curia brought far, that is, spelt (a kind of grain), to be toasted in the meeting hall and sacrificed to ensure that bread in the household ovens wouldn’t be burnt in the coming year. Then the curiae assembled for a collective feast.

If on the last day of the Fornacalia (17th of February) anyone had missed the feast or was not a member of a curia (or had forgotten which one he belonged to), he could make a private sacrifice at the general assembly of all the curiae called the Quirinalia. It is believed by some, that because of this the Romans called the Quirinalia the Stultorum feriae, the ‘Feast of Fools.’

The Fornacalia was a festival of ovens, in which Fornax was invoked by baking wheat breads and other grain-related foods. So think about dusting off your cookbooks, especially any recipes from your family, and start baking! Even people pressed for time can usually make a bath of bread from frozen dough.

If you only own a microwave, have no fear – microwaveable soft-dough pretzels are readily available in the freezer section of your supermarket. Or, simpler still, have toast for breakfast this morning to internalize Fornax’s warm emotions. On the other hand, if you’d like to give Fornax a much needed break from her toils at your place, go out and eat! Just make sure to have some bread as part of your meal to welcome Fornax to your feast.

Finally, take any dried bread you have and crumble it up for the birds. Focus  on your desire for love and closeness in your life. The birds will convey your wishes to Fornax, the heavens, and the four corners of creation.

A Ritual For Today

This ritual should be performed in the kitchen, with the altar built on top of the stove or inside the oven. Set a brown cloth with a red candle and many loaves of bread on wooden trays.

Goddess of the Oven
Lady of Fire Enclosed,
Sacred Baker of our food,
We all started as dough,
Raw and soft and unformed,
And we were patted into shape
By those who raised us,
Yet we could not bring ourselves
Fully grown to the table
Until we had endured
The hardening flame.
Be kind to us, Lady!
As we go through life
Let us not be scorched
Or spared the fire
But bring us gently through
To be our final selves.

Baker of the Loaf of Earth
We endure your fire

(One of the loaves is broken and handed around and shared, some more are set aside to eat later, and then the rest are taken to some deserving place and donated.)

Promote Your Page Too
Bread Crumbs
A trail of bread crumbs in case you lose your way wandering through this site ... Pagan Calendar > Blog Page > February > The Fornacalia