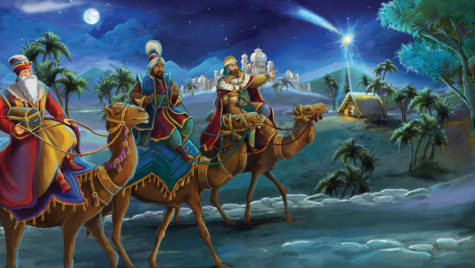 Santa Claus may have gone back to the North Pole to rest, but it doesn’t mean the gift-giving (and receiving) is over — at least not for the thousands of children in Latin America and Spain anxiously awaiting“El Día de los Reyes” Celebration on Jan. 6th.

For many Christians, the holiday season doesn’t officially end until the 12th day of Christmas known as the “Feast of the Epiphany” or “Three Kings’ Day”.

The holiday marks the biblical adoration of baby Jesus by the three Kings, also referred to as three Wise Men or Magi. According to the Gospel of Matthew, the men found the divine child by following a star across the desert for twelve days to Bethlehem. Melchior, Caspar, and Balthazar — representing Europe, Arabia, and Africa respectively — traveled by horse, camel, and elephant in order to present baby Jesus with three symbolic gifts.

The gold offered by one of the wise men is a symbolic acknowledgment of Jesus’ royal standing as “King of the Jews,” while the frankincense manifests the divine nature of the baby’s existence, since he is not an earthly king but the Son of God. And finally the myrrh, often used to embalm corpses, was gifted to the newborn as a symbol of Jesus’ mortality — foreshadowing his death as a means to cleanse humanity of its sins.

Reyes festivities come in different shapes and sizes across the globe from community parades to three-day celebrations at Disneyland. In Mexico, thousands gather every year to taste a mile-long “Rosca de Reyes” (Kings’ Bread) while others simply make the holiday staple at home honoring the tradition to hide a baby Jesus figurine within the bread — the person whose slice has the figurine must prepare tamales for everyone on the Day of the Candles on Feb. 2!

Promote Your Page Too
Bread Crumbs
A trail of bread crumbs in case you lose your way wandering through this site ... Pagan Calendar > Blog Page > January > Three Kings Day