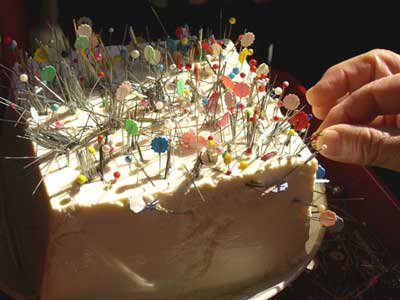 In the Hari-Kuyo ceremony, Japanese women gather once a year on Febuary 8th at Shinto shrines or Buddhist temples to thank their worn out needles and pins for good service.

It is also a time to value the small, everyday objects of daily living and to wish for progress in one’s needle work. In what is known as the Festival of Broken Needles, women gather to offer a funeral-type service by laying the needles to rest in soft jelly cakes or tofu. This burial is meant to bring rest to the needles and wrap them with tenderness and gratitude. This practice reflects the animist belief that all beings and objects have a soul.

Another aspect of the ceremony is the consideration for “the value of small things.” The concept of Mottainai, or not being wasteful, is related to the usefulness of the needles. These small but important tools would give long, useful service throughout the year. They were not to be lost or wasted nor carelessly replaced.

Further to the idea of laying the needles to rest for good service is the idea that women have many secret sorrows in life. These sorrows are often passed to the needles during long hours of stitching and the needles are thought to take on the burden of some of these sorrows, thus taking them away with the stitching that they do. This “rest” is brought to the needles in appreciation for their faithful service.

One Response to Festival of Broken Needles

Promote Your Page Too
Bread Crumbs
A trail of bread crumbs in case you lose your way wandering through this site ... Pagan Calendar > Blog Page > February > Festival of Broken Needles