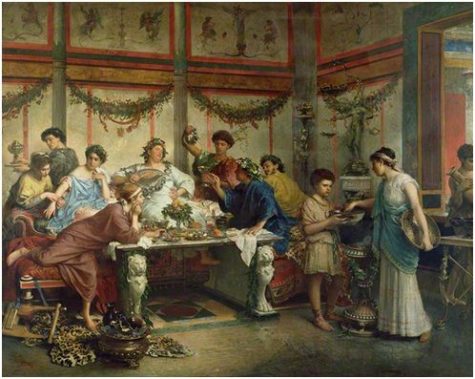 Anthesteria, held on February 11th, celebrates the maturing of the wine and the beginning of spring. It’s an Athenian festival in honor of Dionysus, god of the grape harvest, winemaking, and wine. The celebration lasted for three days in the month of Anthesterion (from the Hellenic calendar in ancient Attica).

The word Anthesteria is associated with “flower” or the “bloom” of the grape. A. W. Verrall (Journal of Hellenic Studies, xx., 1900, p. 115) wrote that it was a feast of “revocation” where the dead were recalled to the land of the living.

In ancient Greece, Anthesteria was the name of a festival during which the participants ritually expelled the Keres, evil female spirits, from their houses.

On the first day, called Pithoigia (opening of the casks), wine from the newly opened casks was offered to Dionysus and everyone in the household, including servants and slaves. The home and children were adorned with spring flowers.

The second day, named Choës (feast of beakers), was for visiting. People dressed for the day, some even dressed as Dionysus. They spent the day visiting friends and family as well as the local drinking clubs were drinking games were held. Some folks offered wine to deceased relatives by pouring libations on the their tombs.

For the state, however, if was a formal day with secret ceremonies in one of the sanctuaries of Dionysus. The basilissa (or basilinna), wife of the archon basileus, would marry the god of wine in a special ceremony. She was assisted by fourteen Athenian matrons, called geraerae, who the basileus chose and swore to secrecy.

Both Pithoigia and Choës were considered unlucky and defiled days that necessitated atoning with libations. From this the souls of the dead would come up from the underworld and walked the earth. People chewed on buckthorn leaves and smeared tar on their doors to protect themselves from evil.

The third day, Chytri (feast of pots), was a festival of the dead. Cooked legumes were offered to Hermes, son of Zeus, and he would make the souls of the deceased depart.

Promote Your Page Too
Bread Crumbs
A trail of bread crumbs in case you lose your way wandering through this site ... Pagan Calendar > Blog Page > February > The Anthesteria