The “L’Hom Strom” festival takes place on the first Saturday in February every year the small community of Scuol in canton Graubünden, (in Switzerland close to the borders of both Austria and Italy). The “hom strom” is the famous “Straw Man of Scuol,” a large dummy.that is set alight. 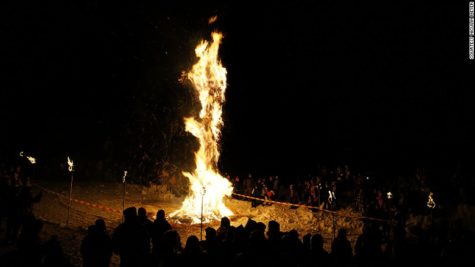 On the first Saturday in February, young men crack whips to assemble the population, and the youths of Scuol, then go from farm to farm collecting straw which has been hand-threshed and especially prepared for this purpose. The straw is taken down to the village square where the thick strands of rye are then twined around a telephone pole which is almost eight meters (24 ft) long. The work must be done by noon, at which time the bundle should have reached a diameter of approximately two meters. 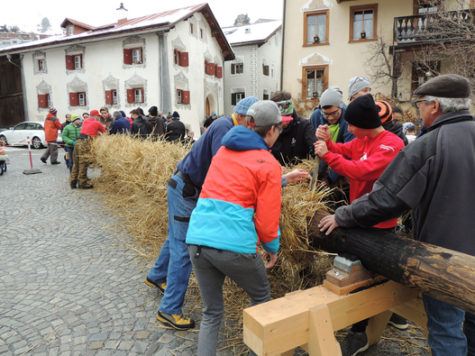 In the afternoon, a group of adults take the “l’hom strom” to Gurlaina and place the Hom Strom in a specially prepared hole in a field, and there set up ready for burning. The enormous effigy is carefully guarded to protect him so that pranksters – specifically the boys from the next village – cannot light him before his time!

At dusk, the people of Scuol parade through the village streets singing songs on the way to Gurlaina. As night falls, the dummy is burned, accompanied by songs to drive away the winter.When the tower clock strikes eight, the oldest boys throw balls of fire, which are rags drenched in petroleum and which have up to now illuminated the grounds, at the Hom Strom and set him aflame. 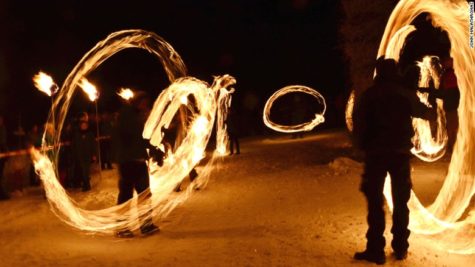 At the end of the burning ceremony attending locals sing the fourth stanza of the song Hom Strom written in the 50’s by Men Rauch, born and raised in Scuol, where a Christian adaptation is easily recognizable:

The flames that burn up into the sky,
give praise to the Lord,
who, in turn, protects us from evil,
long live our straw man!!…

The children and adults sing the Hom Strom song, written by a native poet. Half an hour later, the spirit of winter is consumed and everyone walks back to the village. This death by fire symbolizes the rapidly approaching end of winter.

Posted in February, Fire Festivals | Tagged Bonfires, Out With The Old

Promote Your Page Too
Bread Crumbs
A trail of bread crumbs in case you lose your way wandering through this site ... Pagan Calendar > Blog Page > February > Burning The Hom Strom