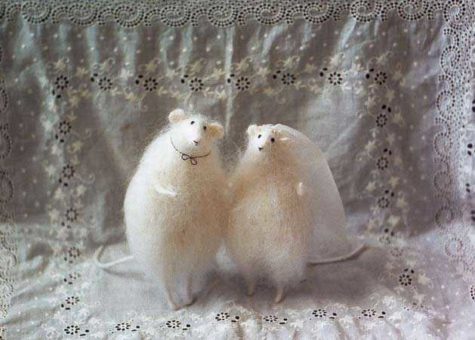 This ritual is linked to chasing away mice from the house and village and is observed on different days in different areas. In many places, this coincides with the Day of Martyr Nestor of Thessalonica, (October 27), or the day after the Day of the Archangel Michael (November 8th).

On this day, no one should utter the word ‘mouse,’ lest.they hear their name and decide that they have been invited to stay at or come to your house. This day is traditionally honored by women. No household work is done, so that mice do not harm the house or the grain. Skirts are sewn up the front and the back as a symbolic “sewing up” of the mice’s eyes. Fireplaces might also be (temporarily) sealed, so that the eyes and mouths of the mice are similarly covered.

Then the Mice Wedding is performed. Calling them “lad” and “lady”, a male and a female mouse are dressed as bride and groom and married in a ritual typical to a human wedding of the region. They are then placed in a basket and marched through the village in a solemn procession, The newly weds are then taken far as away from the village where they are set free, or more commonly, taken to the river and ceremonially drowned.

The idea being that the other mice in the village would be inspired to follow the procession out of the village. Marriage was the most common cause of a change in place to live, and by all means a wedding is the prerequisite for establishing a new home and a new family. Alternatively, the other mice would be so frightened by the sudden drowning of the happy couple that they would never return to the village.

If however, despite the ritual performed on Mice’s Day, the little rodents still managed to breed in hordes, it was considered a sign that someone was secretly stealing something away from the household, either food or household items. And in most cases suspicion fell on daughters-in-law and young farmhands who were not blood relations.

Once a married man was taking away more items and clothes on the sly to give them to his mistress. Once his wife found out about the betrayal, she took the matter to the judge. The judge summoned the disloyal husband and demanded an explanation. The man denied the whole time, until finally the wounded wife blurted out the last and uncontested proof, namely that the mice in the house had bred in unusually high numbers. Then the cheating husband admitted his shame and confessed he was taking those gifts to another woman.

Another common explanation of the phenomenon of mice that continued to breed was that the family members were in discord, either daughters-in-law quarreled with one another, or refused to respect their father and mother-in-law, or possibly, the sons did not obey their own fathers’ will.

Posted in November, October | Tagged Animals, Out With The Old

Promote Your Page Too
Bread Crumbs
A trail of bread crumbs in case you lose your way wandering through this site ... Pagan Calendar > Blog Page > November > Mice Wedding Day