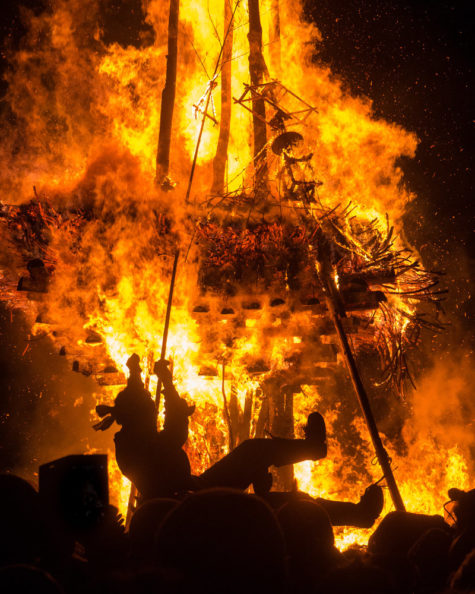 Alternatively known as ‘Tondo Matsuri’, ‘Sai No Kami’, ‘Sagicho’’ and Dondo Yaki’, Dōsojin Matsuri are special New Year Fire Festivals. They are held in shrines and public spaces to bless and then burn the previous year’s New Year’s decorations on a huge bonfire constructed of a wigwam of bamboo.

Shimekazari (sacred New Year decoration made from braided rice straw and good luck charms) and other New Year ornaments are taken down from homes and ceremoniously burned on the fire to secure good health and a fruitful harvest the following year. The calligraphic wishes or prayers of young children (called kakizome) are also placed onto the bonfire. As the children’s’ prayers are burnt, they are lifted up into the air towards the gods, bringing success to the children in the new year. 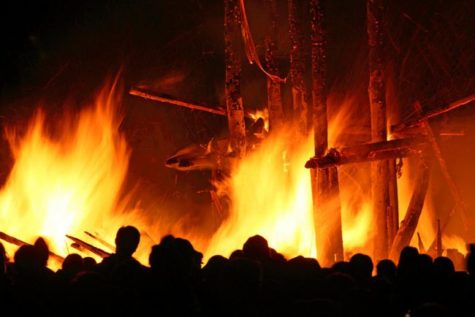 The loud crackling and popping sounds made by the burning bamboo is believed to tell listeners whether or not they will receive good fortune in the year to come.

Dōsojin is also the name for the Shinto guardian deities, which are closely associated with fertility in crops and people. At Dōsojin Matsuri, prayers are made to Dōsojin statues for successful births and bountiful harvests. One of the largest celebrations of Dōsojin Matsuri takes place at Nozowa Onsen in Nagana Prefecture.

Fire and snow always go well and the Nozawa Onsen Fire Festival, Nozawa Onsen Dosojin Matsuri exemplifies this as one of the three great fire festivals in Japan.

Taking place on January 15th every year, the festival is staged to celebrate the birth of a family’s first child, to dispel evil spirits and also to pray for happy marriage.

Each year crowds gather for the famous Dōsojin Matsuri, a kind of cleansing ritual for men aged 25 and 42 years, the so-called ‘unlucky ages’ in Japan. The 42-year-olds’ task is to defend a purpose-built two-story shrine, which they sit upon as it is besieged by fire at the hands of the 25-year-olds and onlookers. 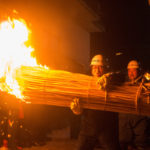 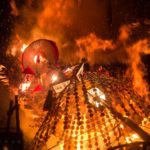 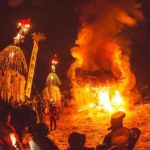 It takes roughly one hundred villagers to build the shrine for the Nozawa Fire Festival. The trees are cut down in October and brought down from the mountain and through the village on January 13th prior to being made into a huge wooden structure or shaden. After the shaden has been constructed, the priest from Kosuge shrine performs a ceremony endowing it with a dosojin.

The highlight on January 15th is a “fire-setting battle” which ends up with the setting fire of the shaden with blazing torches by the offensive team and the offering of torches to the deity, making the festival truly spectacular and exciting.

The main spectacle involves a small group of 25 year old villagers guarding the base of the three story structure, and another group of very inebriated 25 year old men sitting atop the structure drinking and cheering on their teammates. Directly across from the structure, a massive bonfire is lit, which is flanked on both sides by excited visitors.

The villagers light their bamboo bundles on fire and walk in groups as large as 10 to the structure to do battle with the guards. The men at the base form human shields and use tree branches to extinguish the flames. The entire battle can last for over 2 hours and became very intense and violent at times with men shoving, jumping, slapping, and hitting each other with lit bundles of bamboo. 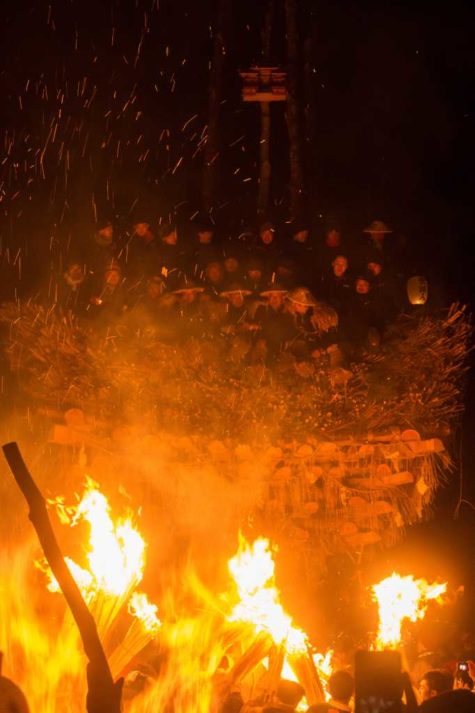 The entire festival is quite lengthy and can take up to four hours from the beginning to the end. Some observers gather just for the main attraction which is the battle between the guards and the torch bearing villagers. Add liberal servings of saké to all of the above and you’re sure to go home buzzing after seeing quite a spectacle – and maybe a bit scorched from the flames (don’t wear your new down jacket).

This famous Japanese festival is nationally designated as an important intangible folk cultural property. It originally began as an invocation for a good harvest, health and good fortune in the coming year, but has been expanded to include a good ski season as well.