On August 21, the ancient Romans celebrated the Consualia, a festival, with games, in honour of Consus, the god of secret deliberations. 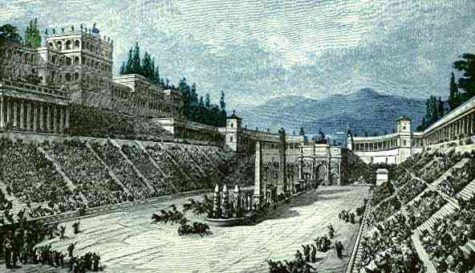 It was solemnized every year in the circus, by the symbolical ceremony of uncovering an altar dedicated to the god, which was buried in the earth. This was because Romulus, who was considered the founder of the festival, was said to have discovered an altar in the earth on that spot.

The solemnity took place on the 21st of Augusta with horse and chariot races, and libations were poured into the flames which consumed the sacrifices. During these festive games, horses and mules were not allowed to do any work, and were adorned with garlands of flowers.

This festival is associated with the “Rape of the Sabine Women.” When after the building of Rome the Romans had no women, it is said, and when their suit to obtain them from the neighboring tribes was rejected, Romulus spread a report, that he had found the altar of an unknown god buried under the earth. The god was called Consus, and Romulus vowed sacrifices and a festival to him, if he succeeded in the plan he devised to obtain wives for his Romans. According to legend, it was at the first celebration of the Consualian Games that the Sabine maidens were carried off. The purpose being to populate the newly built town of Rome.

Note: Consus was eventually identified with Neptunus Equester, the alias and counterpart of Poseidon Hippios (Neptune), who was the founder of Atlantis, where, according to Plato, horses (hippos, equus) originated. Hence the connection with the animal.

Found in: A Dictionary of Greek and Roman Antiquities

Promote Your Page Too
Bread Crumbs
A trail of bread crumbs in case you lose your way wandering through this site ... Pagan Calendar > Blog Page > August > Festival of Consus