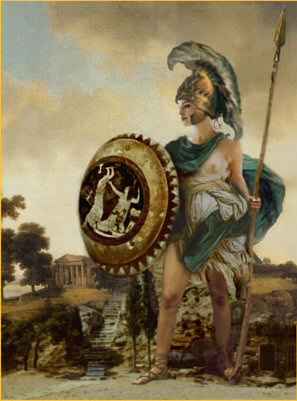 One source that talks about the dedication of the Temple of Bellona on June 3rd is in Ovid’s “Fasti”, a six book poem the Roman poet Ovid had published around 8 AD. This quote is found in Ovid’s 6th and final book:

“When two dawns are past, and Phoebus has risen twice,
And the crops have twice been wet by the dewfall,
On that day, they say, during the Tuscan War, Bellona’s
Shrine was consecrated, she who always brings Rome success.”

This goddess did not play a significant role in either myth or legend, and her worship appears to have been promoted in Rome chiefly by the family of the Claudii, whose Sabine origin, together with their use of the name of Nero, has suggested an identification of Bellona with the Sabine war goddess Nerio.

Her temple at Rome, dedicated by Appius Claudius Caecus (296 B.C.) in fulfillment of a a vow during the Third Samnite War with the Samnites and Etruscans, stood in the Campus Martius, near the Flaminian Circus and Porta Carmentalis (the Carmenta gate), and outside the gates of the city. It was there that the senate met to discuss a general’s claim to a triumph, and to receive ambassadors from foreign states. In front of it was the columna bellica, where the fetialis ceremony of declaring war was performed, in which a spear was cast against the distant enemy.

This native Italian goddess should not be mistaken for the Asiatic Bellona, whose worship was introduced into Rome apparently by Sulla, to whom she had appeared, urging him to march to Rome and bathe in the blood of his enemies. See Day of Blood

One Response to Festival of Bellona

Promote Your Page Too
Bread Crumbs
A trail of bread crumbs in case you lose your way wandering through this site ... Pagan Calendar > Blog Page > June > Festival of Bellona