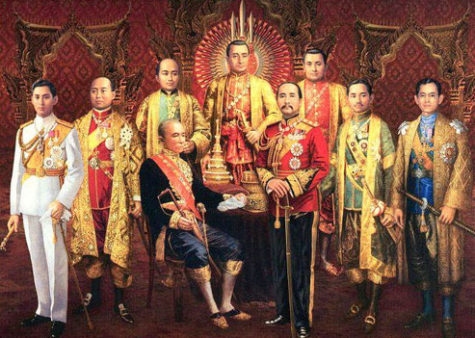 Officially called ‘King Buddha Yodfa Chulaloke the Great Day and Chakri Dynasty Memorial Day’, Chakri Day commemorates the establishment of the Chakri Dynasty in 1782. It falls on April 6 each year, with the public holiday on the following Monday if it falls on Saturday or Sunday.

This day commemorates the establishment of the Chakri Dynasty (the current ruling house) and the founding of Bangkok by King Rama I in 1782.

In general, Chakri Day day celebrations are low key, particularly compared to the Songkran Festival to follow. While not an outright Buddhist holiday, ceremonies are held at the Temple of the Emerald Buddha (Wat Phra Kaew) in Bangkok and other temples around the country.

The national flag is displayed. People participate in traditional ceremonies and leave flowers and garlands at the statues of Kings in the House of Chakri.

The King and the royal family presides over religious ceremonies held at the royal chapel. He also pays respect to his predecessors at the Royal Pantheon and lays a wreath at the statue of King Rama I at the Memorial Bridge. All government officials take part in the wreath-laying ceremony.

Promote Your Page Too
Bread Crumbs
A trail of bread crumbs in case you lose your way wandering through this site ... Pagan Calendar > Blog Page > April > Chakri Day