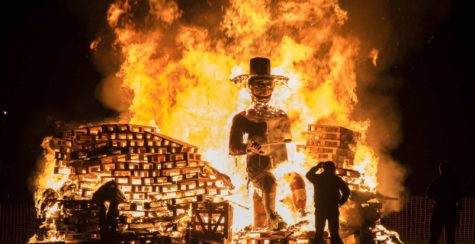 In Great Britain, Bonfire Night is associated with the tradition of celebrating the failure of Guy Fawkes’ actions on 5 November 1605. The British festival is, therefore, on 5 November, although some commercially driven events are held at a weekend near to the correct date, to maximize attendance.

Bonfire night’s sectarian significance has generally been lost: it is now usually just a night of revelry with a bonfire and fireworks, although an effigy of Guy Fawkes is burned on the fire. Celebrations are held throughout Great Britain; in some non-Catholic communities in Northern Ireland; and in some other parts of the Commonwealth. In the Canadian province of Newfoundland and Labrador, 5 November is commemorated with bonfires and firework displays, and it is officially celebrated in South Africa.

There are many food items that are associated with Bonfire Night. Toffee apples, treacle toffee, black peas and parkin, and even the jacket potato, are traditionally eaten around Bonfire Night in parts of England.

This Day in History

The history of this annual commemoration begins with the events of 5 November 1605, when Guy Fawkes, a member of the Gunpowder Plot, was arrested while guarding explosives the plotters had placed beneath the House of Lords. Celebrating the fact that King James I had survived the attempt on his life, people lit bonfires around London; and months later, the introduction of the Observance of 5th November Act enforced an annual public day of thanksgiving for the plot’s failure. 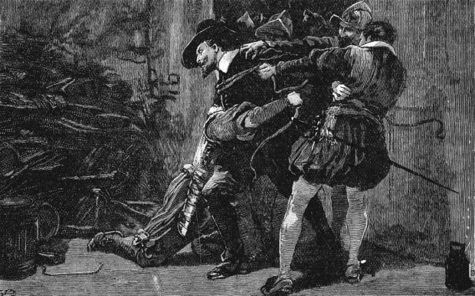 Within a few decades Gunpowder Treason Day, as it was known, became the predominant English state commemoration, but as it carried strong Protestant religious overtones it also became a focus for anti-Catholic sentiment. Puritans delivered sermons regarding the perceived dangers of popery, while during increasingly raucous celebrations common folk burnt effigies of popular hate-figures, such as the pope.

Towards the end of the 18th century reports appear of children begging for money with effigies of Guy Fawkes and 5 November gradually became known as Guy Fawkes Day. Towns such as Lewes and Guildford were in the 19th century scenes of increasingly violent class-based confrontations, fostering traditions those towns celebrate still, albeit peaceably.

In the 1850s changing attitudes resulted in the toning down of much of the day’s anti-Catholic rhetoric, and the Observance of 5th November Act was repealed in 1859. Eventually the violence was dealt with, and by the 20th century Guy Fawkes Day had become an enjoyable social commemoration, although lacking much of its original focus. The present-day Guy Fawkes Night is usually celebrated at large organised events, centered on a bonfire and extravagant firework displays.

Settlers exported Guy Fawkes Night to overseas colonies, including some in North America, where it was known as Pope Day. Those festivities died out with the onset of the American Revolution. Claims that Guy Fawkes Night was a Protestant replacement for older customs like Samhain are disputed, although another old celebration, Halloween, has lately increased in popularity, and according to some writers, may threaten the continued observance of 5 November. 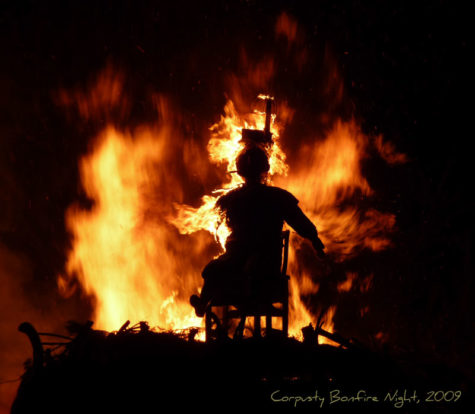 One notable aspect of the Victorians’ commemoration of Guy Fawkes Night was its move away from the centers of communities, to their margins. Gathering wood for the bonfire increasingly became the province of working-class children, who solicited combustible materials, money, food and drink from wealthier neighbors, often with the aid of songs. Most opened with the familiar “Remember, remember, the fifth of November, Gunpowder Treason and Plot”.

The earliest recorded rhyme, from 1742, is reproduced below along with one bearing similarities to most Guy Fawkes Night ditties, recorded in 1903 at Charlton on Otmoor:

Don’t you Remember,
The Fifth of November,
‘Twas Gunpowder Treason Day,
I let off my gun,
And made’em all run.
And Stole all their Bonfire away.

The fifth of November, since I can remember,
Was Guy Faux, Poke him in the eye,
Shove him up the chimney-pot, and there let him die.
A stick and a stake, for King George’s sake,
If you don’t give me one, I’ll take two,
The better for me, and the worse for you,
Ricket-a-racket your hedges shall go.

Promote Your Page Too
Bread Crumbs
A trail of bread crumbs in case you lose your way wandering through this site ... Pagan Calendar > Blog Page > Fire Festivals > Guy Fawkes Night