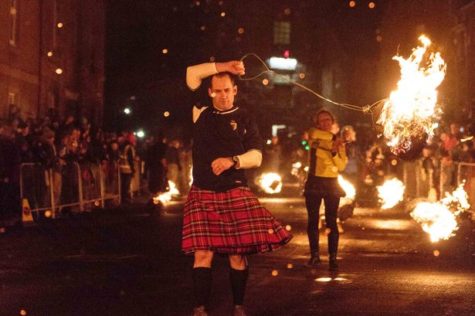 To celebrate the New Year fireballs swing in Stonehaven, Scotland.

The ceremony consists of mainly local people of all ages swinging flaming wire cages, around their heads. Each cage is filled with combustible material (each swinger has their own recipe) and has a wire handle two or three feet long, this keeps the flames well away from the swinger, but spectators can be vulnerable! At the end of the ceremony, the fireballs are tossed into the bay.

The event starts at midnight and is watched by thousands. The idea behind the ceremony is to burn off the bad spirits left from the old year so that the spirits of the New Year can come in clean and fresh.

From current research the ceremony would seem to go back from a hundred to a hundred and fifty years, but it could easily be much older.

The ceremony today lasts only around twenty to thirty minutes but in the past it could last an hour or more. Then, some of the swingers would swing their fireball for a few yards and then stop outside a house that was occupied by someone that they knew. They would drop their fireball at the curbside and pop in for their ‘New Year’! After a while they would come out, pick up their ‘ball’ and swing on down to the next house, and so on. As quite a number of the swingers would have had many relatives and friends staying in area it could take some time to get from one end of the street to the other!

Promote Your Page Too
Bread Crumbs
A trail of bread crumbs in case you lose your way wandering through this site ... Pagan Calendar > Blog Page > Fire Festivals > Stonehaven Fireball Ceremony