The Plebeian Games were an ancient Roman religious festival held November 4–17. The games included both theatrical performances and athletic competitions for the purpose of entertaining the common people of Rome.

The Ludi Plebeii comes from the two words ludi (meaning play, games, etc.) and plebeii (meaning a “pleb” or plebian: a commoner person as in comparison ta member of the royal or upper class). The Ludi Plebeii or Plebeian Games were an ancient Roman festival held from November (which is derived from novem or 9, because it was originally the ninth month of the year) 4th to the 17th.

The ludi or game factor of the festival was because this celebration had both theatrical performances( such as comedy, satire, tragedy plays) and athletic competitions (running, chariot racing,etc).

The importance of the Ludi Plebeii is because it represents one of the earliest national holidays of liberation. Similar to the United State’s Fourth of July or the French holiday Bastille Day, the Ludi Plebeii celebrated the plebeian’s political liberty. The Ludi Plebeii are thought to be the oldest public festival having been established roughly in 220 BCE. The great orator Cicero considered them Rome’s oldest Ludi.

The liberation that is being celebrated often varies from the tyranny of the Tarquins (an Etruscan Roman family whose history can be read on here ) or the suppression and dominance of the patricians (who were the ruling class of Rome in the struggle known as the Conflict of the Orders). Some historians even conjecture that the festival was celebrated before 220 BCE, but due to the lack of a religious calendar it was not recorded.

The dates vary for the happenings of the festival; however, they seem to follow a certain pattern:

During the Ludi Plebeii, the first ceremonial rite was a feast to Jupiter (Zeus) known as Epulum Iovis was held on November 13th (some sources say the Ides of November which is the 15th). This feast entitled the Senator to eat on the Capitoline as the public’s expense while the Roman plebeians or commoners dined in the Forum. Following the feast were several days of performance and games ( theses days vary from 9 of performance and 4 of games to smaller denominations). On the day of the Games, a great Pompa, or procession, led by statues of the Capitoline Triad, would proceed to the Circus, where Gods and men joined to watch the races. The games usually ended on the 17th of November. 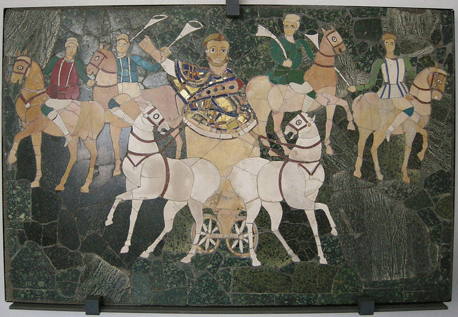 A more scholarly description is as follows:

The Ludi Plebeii were, according to Pseudo-Asconius, founded to commemorate the freedom of the plebeian order after the banishment of the kings, or after the secession of the plebs to the Aventine. However, historic evidence does not support the first theory and it is likely that these games were instituted in commemoration of the reconciliation between the patricians and plebeians after the plebeians removed to either the mons sacer or, according to others, the Aventine.

The Ludi were initially conducted from November 16-18, overseen by the aediles plebis. The aediles were garbed in the robes of a triumphator, hinting at a link between the games and the ancient triumphal rites. They are almost certainly the oldest games extant, second only to the Ludi Romani held in September. Legend places the Ludi in the early history of Rome, however, the earliest mention by Livy sets the games in 216 BCE in the Circus Flaminius, built around 220 BCE and the latest record of the games can be found on the Calendar of Philocalus.

By 207 BCE the Ludi were celebrated over several days, and the Fasti Maffeiani, one of the most important surviving contemporary calendars from the Augustan era, sets the Ludi from 4-17 November.

The central focus of the Ludi was the Epulum Iovis, or feast of Iuppiter, on the Ides of November, this date being sacred to Him. The Senators ate at public expense on the Capitoline, while the Roman public dined in the Forum. The Epulum Iovis were preceded by nine days of theatrical performances and four days of racing in the Circus. On the day of the Games, a great Pompa, or procession, led by statues of the Capitoline Triad, would proceed to the Circus, where Gods and men joined to watch the races.

Titus Maccius Plautus (254-184 BCE) probably sold his first plays at the Ludi, and his play Stichus was first performed at the Ludi Plebeii. Plautus’ puns and slapstick humour were greatly valued by the Romans themselves (if not by the likes of Horace and Augustus) and influenced a much later playwright from the 16th Century: William Shakespeare.

The modern and beloved musical, A Funny Thing Happened on the Way to the Forum is inspired by Plautus and contains many of his characters, including Miles Gloriosus, the braggart soldier, Pseudolus, the wily slave, and Senex, the doddering oldster.

Promote Your Page Too
Bread Crumbs
A trail of bread crumbs in case you lose your way wandering through this site ... Pagan Calendar > Blog Page > November > The Ludi Plebeii – Plebeian Games