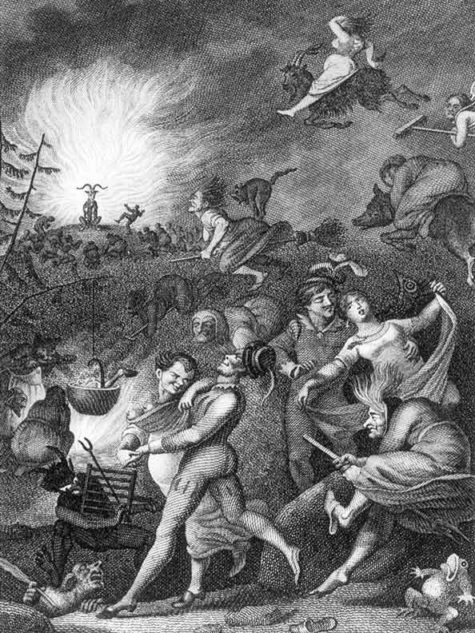 In Germany, Walpurgisnacht (or Hexennacht, meaning witches´ night), the night from April 30 (May eve), is the night when allegedly the witches hold a large celebration on the Blocksberg (the highest of the Harz Mountains of north central Germany)  hold revels with their Gods, and await the arrival of Spring.

In some parts of northern coastal regions of Germany, the custom of lighting huge Beltane fires is still kept alive, to celebrate the coming of May, while most parts of Germany have a derived christianized custom around Easter called “Easter fires”.

In rural parts of southern Germany it is part of popular youth culture to go out on Walburgisnacht to play pranks on other people, like messing up someone’s garden, hiding stuff or spraying messages on other people’s property. Sometimes these pranks go too far and may result in serious willful damage to property or bodily injury.

Walpurgis (sw: Valborg) is one of the main holidays during the year in both Sweden and Finland, alongside Christmas and Midsummer. The forms of celebration in Sweden vary in different parts of the country and between different cities. One of the main traditions in Sweden is to light large bonfires, a custom which is most firmly established in Svealand, and which began in Uppland during the 18th century. An older tradition from Southern Sweden was for the younger people to collect greenery and branches from the woods at twilight, which were used to adorn the houses of the village. The expected reward for this task is to be paid in eggs.

Today in Finland, Walpurgis Night (Vapunaatto) is, along with New Year’s Eve, the biggest carnival-style festivity that takes place in the streets of Finland’s towns and cities. The celebration is typically centered on plentiful use of sparkling wine and other alcoholic beverages. The student traditions are also one of the main characteristics of “Vappu“. From the end of the 19th century, “Fin de Siècle“, and onwards, this traditional upper class feast has been co-opted by students attending university, already having received their student cap. Many people who have graduated from lukio wear the cap.

One tradition is drinking sima, whose alcohol content varies. Fixtures include the capping of the Havis Amanda, a nude female statue in Helsinki, and the biannually alternating publications of ribald matter called Äpy and Julkku. Both are sophomoric; but while Julkku is a standard magazine, Äpy is always a gimmick. Classic forms have included an Äpy printed on toilet paper and a bedsheet. Often the magazine has been stuffed inside standard industrial packages such as sardine-cans and milk cartons. The festivities also include a picnic on May 1st, which is sometimes prepared in a lavish manner.

The Finnish tradition is also a shadowing of the Soviet Era May Day parade. Starting with the parties of the left, the whole of the Finnish political scene has nominated Vappu as the day to go out on stumps and agitate. This does not only include right-wing parties, but also others like the church have followed suit, marching and making speeches.

In Sweden it is only the labor and socialist parties which use May 1 for political activities, while others observe the traditional festivities. The laborers who were active in the 1970’s still party on the first of May. They arrange carnivals and the radio plays their old songs that workers liked to listen to. The labor spirit lies most in the capital of Finland, Helsinki.

The First of May is also a day for everything fun and crazy: children and families gather in market places to celebrate the first day of the spring and the coming summer. There are balloons and joy, people drink their first beers outside, there are clowns and masks and a lot of fun. The first of May includes colorful streamers, funny and silly things and sun. The first of May means the beginning of the spring for many people in Finland.

Traditionally May 1st is celebrated by a picnic in a park (Kaivopuisto in the case of Helsinki). For most, the picnic is enjoyed with friends on a blanket with good food and sparkling wine. Some people, however, arrange extremely lavish picnics with pavilions, white table cloths, silver candelabras, classical music and lavish food. The picnic usually starts early in the morning, and some hard-core party goers continue the celebrations of the previous evening without sleeping in between. Some Student organisations have traditional areas where they camp every year and they usually send someone to reserve the spot early on. As with other Vappu traditions, the picnic includes student caps, sima, streamers and balloons

The tradition which is most widespread throughout the country is probably singing songs of spring. Most of the songs are from the 19th century and were spread by students’ spring festivities. The strongest and most traditional spring festivities are also found in the old university cities, like Uppsala and Lund where both current and graduated students gather at events that take up most of the day from early morning to late night on April 30, or “sista April” (“The last day of April”) as many people call it. There are also newer student traditions like the carnival parade, The Cortège, which has been held since 1909 by the students at Chalmers in Gothenburg. In Sweden, Valborg is especially notorious because of the excessive amounts of alcohol people consume on that day.

Promote Your Page Too
Bread Crumbs
A trail of bread crumbs in case you lose your way wandering through this site ... Pagan Calendar > Blog Page > April > Walpurgis Night Traditions and Celebrations