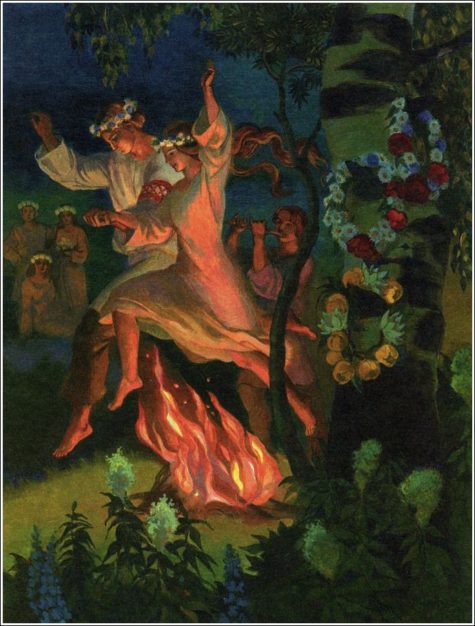 The first of May is Beltane or May Day, a time to celebrate the leaping fires of passion. Traditionally celebrated on April 30, (May eve), it marks the height of spring and the flowering of all life. Beltane is a festival of sensuality, sexuality, flowers and delight. It is a traditional time to make love, preferably outdoors.

Beltane is the time when fairies return from their winter rest, carefree and full of mischief and delight. On the night before Beltane, in times past, folks would place rowan branches at their windows and doors for protection. If you do not wish the fairies to visit, do the same! This is also a perfect time for night or predawn rituals to draw down power to promote fertility in body and mind.

At Beltane, the Pleiades star cluster rises just before sunrise on the morning horizon. The Pleiades is known as the seven sisters, and resembles a tiny dipper-shaped pattern of six moderately bright stars in the constellation of Taurus, near the shoulder. Watch for it low in the east-northeast sky, just a few minutes before sunrise.

There are many lovely old customs associated with this time. Here are some simple ideas for celebrating this wild red time of year:

Holidays are days made holy by the attention we pay them. Simple practices such as the ones listed above remind us that we too dance to the natural rhythms of the earth. 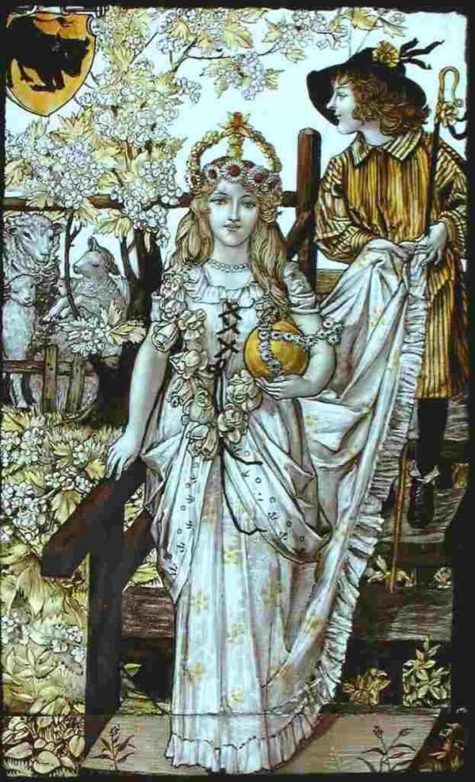 Honor The May Queen

Make an offering of a floral crown, or a libation of honey and milk, to the Queen of the May during your Beltane prayers.

The leaves are budding across the land
on the ash and oak and hawthorn trees.
Magic rises around us in the forest
and the hedges are filled with laughter and love.
Dear lady, we offer you a gift,
a gathering of flowers picked by our hands,
woven into the circle of endless life.
The bright colors of nature herself
blend together to honor you,
Queen of spring,
as we give you honor this day.
Spring is here and the land is fertile,
ready to offer up gifts in your name.
we pay you tribute, our lady,
daughter of the Fae,
and ask your blessing this Beltane. 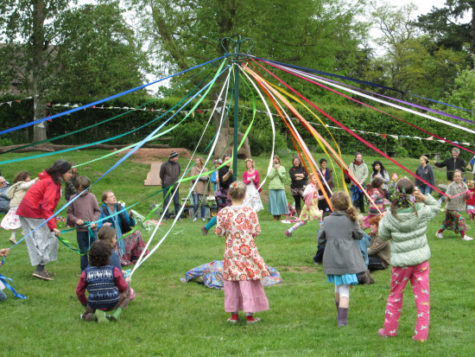 Make A Maypole for Beltane

This isn’t as difficult as you might think. Purchase a twenty foot wood pole from your local hardware store, or make a shorter one with a yardstick, broomstick, or even a twig. Set it up in your backyard.

Invite a group of friends, and ask each one to bring a 2 inch by 20 foot length of brightly colored ribbon (or whatever the length of your pole). Alternatively, you could provide ribbons of various colors. At the top of the pole affix the different colored ribbons – one for each person.

When your guests have assembled, have them each choose a ribbon and make a wish upon it.(For example, “I choose this red ribbon for more passion in my life.”) Everyone grabs their ribbon, and the dancing begins. (Make sure to have extra ribbons just in case!) Dance around the Maypole entwining your ribbons together. And then feast on May wine and food till the dawn. 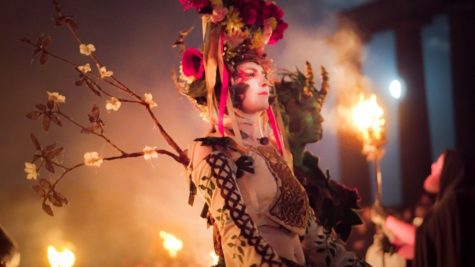 For the Celts, Beltane marked the beginning of the pastoral summer season when the herds of livestock were driven out to the summer pastures and mountain grazing lands. In modern Irish, Mí na Bealtaine (‘month of Bealtaine’) is the name for the month of May. The name of the month is often abbreviated to Bealtaine, with the festival day itself being known as Lá Bealtaine. The lighting of bonfires on Oidhche Bhealtaine (‘the eve of Bealtaine’) on mountains and hills of ritual and political significance was one of the main activities of the festival.

Beltane is a cross-quarter day, marking the midpoint in the Sun’s progress between the vernal equinox and summer solstice. Since the Celtic year was based on both lunar and solar cycles, it is possible that the holiday was celebrated on the full moon nearest the midpoint between the vernal equinox and the summer solstice. The astronomical date for this midpoint is closer to May 5 or May 7, but this can vary from year to year.

In Irish mythology, the beginning of the summer season for the Tuatha Dé Danann and the Milesians started at Bealtaine. Great bonfires would mark a time of purification and transition, heralding in the season in the hope of a good harvest later in the year, and were accompanied with ritual acts to protect the people from any harm by Otherworldly spirits, such as the Sídhe.

Like the festival of Samhain, opposite Beltane on Oct. 31, Beltane was a time when the Otherworld was seen as particularly close at hand. Early Gaelic sources from around the 10th century state that the druids of the community would create a need-fire on top of a hill on this day and drive the village’s cattle through the fires to purify them and bring luck (Eadar dà theine Bhealltainn in Scottish Gaelic, ‘Between two fires of Beltane’).

In Scotland, boughs of juniper were sometimes thrown on the fires to add an additional element of purification and blessing to the smoke. People would also pass between the two fires to purify themselves. This was echoed throughout history after Christianization, with lay people instead of Druid priests creating the need-fire.

The festival persisted widely up until the 1950s, and in some places the celebration of Beltane continues today. A revived Beltane Fire Festival has been held every year since 1988 during the night of 30 April on Calton Hill in Edinburgh, Scotland and attended by up to 15,000 people (except in 2003 when local council restrictions forced the organizers to hold a private event elsewhere).

Wiccans and Wiccan-inspired Neopagans celebrate a variation of Beltane as a sabbat, one of the eight solar holidays. Although the holiday may use features of the Gaelic Bealtaine, such as the bonfire, it bears more relation to the Germanic May Day festival, both in its significance (focusing on fertility) and its rituals (such as maypole dancing). Some Wiccans celebrate ‘High Beltaine’ by enacting a ritual union of the May Lord and Lady.

~Information from various sources including Paganwiccan

3 Responses to Beltane Magick and Lore