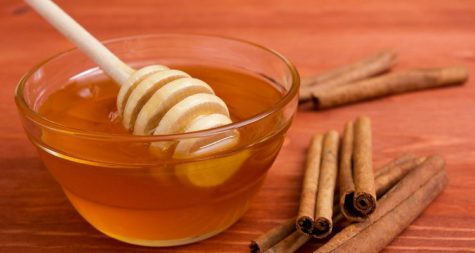 It is found that a mix of honey and cinnamon cures most diseases. Honey is produced in most of the countries of the world. Scientists of today also note honey as very effective medicine for all kinds of diseases. Honey can be used without side effects which is also a plus. Today’s science says that even though honey is sweet, when it is taken in the right dosage as a medicine, it does not harm even diabetic patients. Researched by western scientists:

Arthritis patients can benefit by taking one cup of hot water with two tablespoons of honey and one small teaspoon of cinnamon powder. When taken daily even chronic arthritis can be cured. In a recent research conducted at the Copenhagen University, it was found that when the doctors treated their patients with a mixture of one tablespoon Honey and half teaspoon Cinnamon powder before breakfast, they found that within a week (out of the 200 people so treated) practically 73 patients were totally relieved of pain — and within a month, most all the patients who could not walk or move around because of arthritis now started walking without pain.

People of South America, gargle with one teaspoon of honey and cinnamon powder mixed in hot water first thing in the morning so their breath stays fresh throughout the day.

Take two tablespoons of cinnamon powder and one teaspoon of honey in a glass of lukewarm water and drink it. It destroys the germs in the bladder….who knew?

Recent research in Japan and Australia has revealed that advanced cancer of the stomach and bones have been cured successfully. Patients suffering from these kinds of cancer should daily take one tablespoon of honey with one teaspoon of cinnamon powder three times a day for one month.

Two tablespoons of honey and three teaspoons of Cinnamon Powder mixed in 16 ounces of tea water given to a cholesterol patient was found to reduce the level of cholesterol in the blood by 10 percent within two hours. As mentioned for arthritic patients, when taken three times a day, any chronic cholesterol-could be cured. According to information received in the said Journal, pure honey taken with food daily relieves complaints of cholesterol.

Those suffering from common or severe colds should take one tablespoon lukewarm honey with 1/4 spoon cinnamon powder daily for three days. This process will cure most chronic cough, cold, and, clear the sinuses, and it’s delicious too!

While honey still contains sugar (quick-burning carbs) it doesn’t affect blood sugar levels as much as regular sugar. Of course, the key is also to combine a small amount of honey with cinnamon. This way the cinnamon can work to keep your blood sugar levels steadier than if you ate honey alone.

Recent studies have shown that the sugar content of honey is more helpful rather than being detrimental to the strength of the body. Senior citizens who take honey and cinnamon powder in equal parts are more alert and flexible. Dr. Milton, who has done research, says that a half tablespoon of honey taken in a glass of water and sprinkled with cinnamon powder, even when the vitality of the body starts to decrease, when taken daily after brushing and in the afternoon at about 3:00 P.M., the vitality of the body increases within a week.

According to the studies done in India and Japan, it is revealed that when Honey is taken with cinnamon powder the stomach is relieved of gas.

Those suffering from hair loss or baldness, may apply a paste of hot olive oil, 1 tablespoon of honey and 1 tteaspoon of cinnamon powder before a bath and keep it on for approx 15 minutes and then wash the hair. It was found very effective if kept for 5 minutes also.

Make a paste of honey and cinnamon powder, put it on toast instead of jelly and jam and eat it regularly for breakfast. It reduces the cholesterol and could potentially save one from heart attack. Also, even if you have already had an attack studies show you could be kept miles away from the next attack. Regular use of cinnamon honey strengthens the heart beat.

In America and Canada, various nursing homes have treated patients successfully and have found that as one ages the arteries and veins lose their flexibility and get clogged; honey and cinnamon revitalize the arteries and the veins.

Cinnamon powder sprinkled on two tablespoons of honey taken before food is eaten relieves acidity and digests the heaviest of meals.

Yunani and Ayurvedic have been using honey for years in medicine to strengthen the semen of men. If impotent men regularly take 2 tablespoon of honey before sleeping their problem will be solved. In china, Japan and far-east countries, women who do not conceive may take a pinch of cinnamon powder in half tsp honey and apply it on the gums frequently throughout the day, so that it slowly mixes with the saliva and enters the body.

A couple in Maryland , America had no children for 14 years and had no hope of having a child of their own. When told about this process husband and wife started taking honey and cinnamon as stated, the wife conceived after a few months and had twins at full term.

A scientist in Spain has proved that honey contains a natural ‘Ingredient’ which kills the influenza germs and saves the patient from flu.

Tea made with honey and cinnamon powder, when taken regularly, arrests the ravages of old age. Use four teaspoons of honey, one teaspoon of cinnamon powder, and three cups of boiling water to make a tea. Drink 1/4 cup, three to four times a day. It keeps the skin fresh and soft and arrests old age. Life spans increase and even a 100 year old will start performing the chores of a 20-year-old.

Three tablespoons of honey and one teaspoon of cinnamon powder paste. Apply this paste on the pimples before sleeping and wash it off the next morning with warm water. When done daily for two weeks, it removes all pimples from the root.

When throat has a tickle or is raspy, take one tablespoon of honey and sip until gone. Repeat every three hours until throat is without symptoms.

Applying honey and cinnamon powder in equal parts on the affected parts cures eczema, ringworm and all types of skin Infections.

Make a paste of 1 tsp of cinnamon powder and 5 teaspoons honey and apply on the aching tooth. This may be done 3 times a day daily till such time the pain subsides.

Honey taken with cinnamon powder cures stomach ache and also is said to clear stomach ulcers from its root.

Daily in the morning one half hour before breakfast and on an empty stomach, and at night before sleeping, drink honey and cinnamon powder boiled in one cup of water. When taken regularly, it reduces the weight of even the most obese person. Also, drinking this mixture regularly does not allow the fat to accumulate in the body even though the person may eat a high calorie diet. 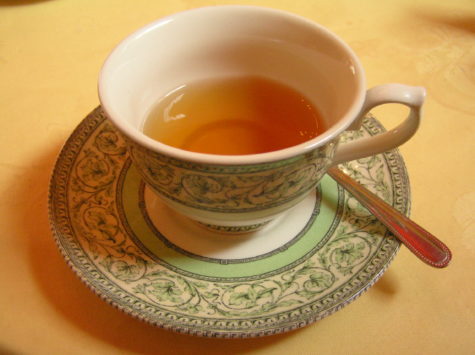 A good healing tea is made as follows:

To prepare the tea:

Boil the water but do not use an aluminum kettle. Pour water into a mug or pot leaving herbs to steep for at least five minutes, but don’t leave for longer than ten minutes or the tea may become bitter. For stronger tea, use more herb rather than steeping the tea for a longer time. Sweeten with honey if desired. 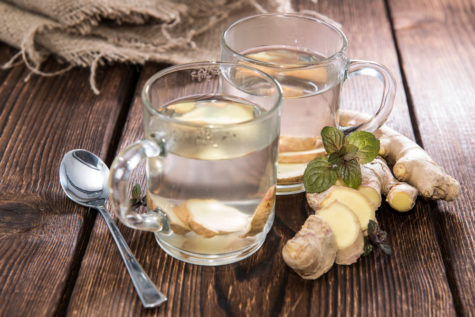 For pain, soak cloths in ginger tea and apply them directly to the painful areas.

To prepare the tea, chop the ginger root into small pieces. Use approximately one to three teaspoons of herb per cup of boiling water. Ginger is very strong, so if you have never used it before, start with the lesser amount of herb. Boil water but do not use an aluminum kettle. Pour water into a mug or pot leaving herbs to steep for at least five minutes, but don’t leave for longer than ten minutes or the tea may become bitter. For stronger tea, use more herb rather than steeping the tea for a longer time. 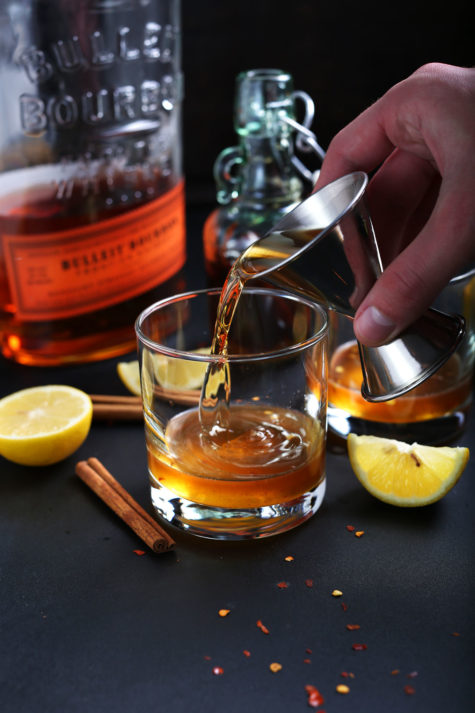 Here’s a recipe for a Hot Toddy

Add the spices to the juice and mix well. Bring the mixture to a boil, pour into a cup and add the honey. Add the bourbon. Inhale the steam and sip very slowly. 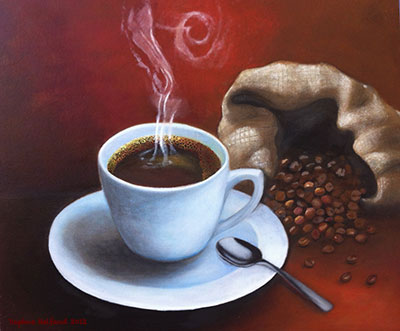 Borrowed from: The Prosperity Project 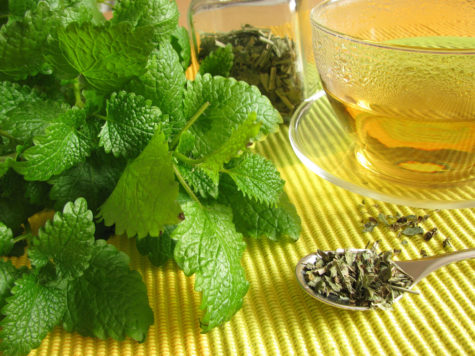 ‘Put two sprigs of Lemon Balm, and a little woodsorrel, into a stone-jug, having first washed and dried them; peel thin a small lemon, and clear from the white; slice it and put a bit of peel in, then pour in 3 pints of boiling water, sweeten and cover it close.’

From: A Modern Herbal

A Tea For Nursing Mothers 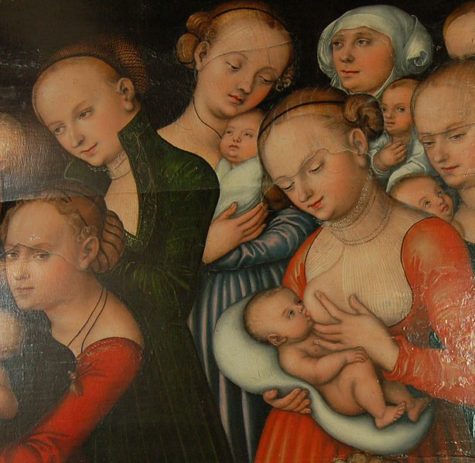 Some mothers find it difficult to either commence milk production or to maintain a high enough level of production while breastfeeding.

Since it is best for the child to be on breast milk for as long as it is feasible, herbs that will help can be invaluable. For this, herbs such as Aniseed, Blessed Thistle, Caraway Seeds, Fennel Seeds, Fenugreek Seeds, Goat’s Rue and Vervain are available, with Goat’s Rue being perhaps the most powerful.

These seeds, which are rich in volatile oils, are also very effective and can be combined to make a very pleasant tea.

Crush two tablespoons of a mixture of the seeds listed above and put them in a cup of cold water. Bring it to simmering point and then remove from the heat. Leave it to stand for 10 minutes, covered to reduce the loss of the volatile oils. Drink a cup of this tea three times a day.

From: The Complete Illustrated Holistic Herbal

Infuse in a covered pot for 10 minutes, strain and take three times a day in wineglassful doses.

From: The Complete Book of Herbs and Spices 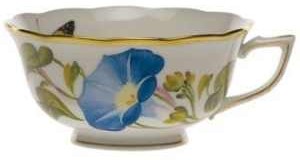 To cure dysentery or diarrhea, take the blue flowers of the “corihuela” (morning glory), make a tea, sweeten with sugar, and take a cupful every morning.

From: Popular Medicine, Customs, and Superstitions of the Rio Grande

You can change this recipe as desired, if you do not have access to all these herbs. The best galactic herbs are nettle, alfalfa, blessed thistle, and red raspberry leaf. The other herbs add wonderful nutrition and are healing to the body. The herbs can be rather bland and grassy tasting on their own, so I added cinnamon (about 1-2 tsp for this quantity), which provided a delightful flavoring. You could try chamomile or lemon balm as an alternative.

Use about 1 tablespoon herbs per cup of boiling water. Allow to steep covered for 15 minutes before consuming. Best results if you consumed 3-5 cups per day. A teaspoon of honey tops it off for a refreshing tea beverage. I use my french press for this recipe with perfect results.

You can make as little or as much as you desire. I choose to make a larger batch at once and used 1/4 cup as my 1 part measurement, but you could cut the recipe in half as desired. This produced about 1 quart full of dried herbs. Combine herbs well and cover securely with a lid.

Store the herbs in a dark cupboard as light will cause nutrition loss.