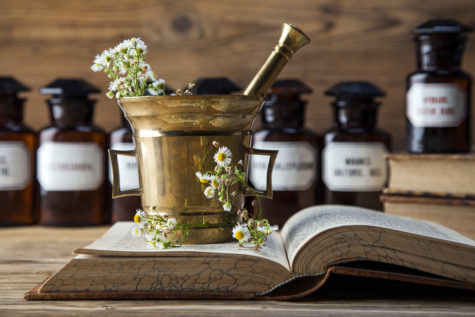 Folk medicine has existed for as long as human beings have existed. In an effort to cope with an environment that was often dangerous, humans, and their ancestors, began to develop ways of lessening pain and treating physical and mental problems.

At first, many of the ways of treating these problems undoubtedly came through trial and error, using various plants and other methods derived from observation of how animals reacted to and treated illnesses and injuries. Over time, individuals within family and tribal groups became more skilled at helping the sick and injured, and some of these became responsible for carrying out healing ceremonies, religious rituals, and other rites designed to ensure the safety and health of their communities.

Many of the methods for treating injuries and diseases have been passed down through families for generations, and some of these have been adopted for use by the medical profession. Those treatments not commonly believed to fit within the framework of modern medical practice are commonly identified as folk medicine.

Illnesses whose etiologies are not recognized by Western medical practice are known as folk illnesses. Folk illnesses are shaped by the cultural and ethnic groups from which they emerge. They are specific to the cosmology of the cultural and ethnic group to which they belong and they have specific causative, diagnostic, preventative, and healing/curing practices that may vary significantly from how they may be viewed by modern medical practitioners.

For example, liver grown is a folk illness found among Pennsylvania Germans. This illness is believed to occur when the liver has become attached to the ribs or some other part of the body cavity. The illness is thought to be more common among children and caused by exposure to a strong wind. It may also be the result of staying outside too long or from being shaken up while traveling.

In the American South, the most common symptom in a child is failure to thrive in the child. The illness is diagnosed by feeling the lower chest and seeking to find the flesh pulled inward. Treatment may involve stretching the child’s arms and legs behind them to loosen the liver or by passing them through a warm horse collar, bramble bush, or other similar process.

It is important to understand that some folk illnesses have common symptoms that are treated by Western medical practitioners, while other symptoms may not be understood by Western medicine to mean the same sort of thing. In the previous example, failure to thrive has a specific Western medical connotation and treatment approach that is different from that employed by those believing in liver grown.

In attempting to understand folk medicine, a number of researchers have noted that these remedies are often learned and passed down from parent to child, and the explanations for illness causation and treatment go hand in hand with this learning process. They have come to classify folk medicine into four major categories:

Folk medicine practitioners use a variety of methods to treat illnesses. These practitioners go by many names, including shaman, curandero, root doctor, spirit medium, herbalist, native healer, medicine man, kahuna, and other related terms. Each has specific treatment approaches, which may include prayer, dancing, medicinal herbs, massage, sweat baths, coining (a process of rubbing the skin with a metal coin), cupping (a treatment used to draw blood to the surface of the skin by means of a small heated vessel made of horn, ceramic, or bamboo), hot and cold foods, and other practices not normally considered in modern biomedicine.

Often these practitioners are the first to be consulted when a family member becomes ill. They are easy to access, tend to share the same illness causality beliefs, will come to the home day or night, and are much less expensive then a clinic, hospital, or doctor’s office visit. Folk medicine practitioners are also often consulted when home remedies fail. If the practitioner also fails, then consultation with the biomedical community may occur.

In addition to the medical practices employed by traditional healers, there has also evolved a profusion of folk healing practices that are not seen by either the folk healer or modern health practitioner. These home healing practices are handed down by word of mouth and are used to treat a variety of illnesses, including anxiety and depression, coughs and colds, burns and sunburns, bladder and kidney infections, bed wetting, bites and stings, asthma, arthritis, birthing problems, bleeding, diarrhea, fever, infertility, insomnia, skin problems, and mouth and gum disorders.

Almost every family has some specific home remedy that has been learned and passed down by older family members, and even in the face of more modern health beliefs they will continue to use these folk remedies before seeking other biomedical treatment methods. For instance, in many families an aloe leaf is used to treat a burn, rather than a burn ointment or spray from the pharmacy.

Other examples of folk medical treatments include:

Magic animals have also been used in folk medical practices. Animal parts and by-products are used to treat certain illnesses or conditions—bird nests are used to prevent headaches, the tooth of a mole may be worn around the neck to prevent toothache, and fresh muskrat skin is used to prevent colds. Other animals thought to have healing properties include toads, snakes, eels, and earthworms.

Prayers are also used in folk medicine. In Appalachian and southern culture, “fire doctors” use prayer to alleviate the pain of burns. In Native-American and Asian cultures, prayer is used to cure soul-loss or ghost sickness. Prayer has been scientifically studied to determine its effects in helping people to get well or to feel better, and there is some evidence that it does have value in the treatment of illness and disease.

Other folk medicine remedies have been shown to be effective. One such remedy is the eating of live-culture yogurt to reduce vaginal yeast infections.

The placebo effect can, however, play a part in the efficacy of a treatment. A strong belief in a certain treatment can yield a positive outcome, even with a treatment that has been shown scientifically not to work. At the same time, some folk remedies, like modern medicines, can have serious, and sometimes fatal, side effects. Plants gathered to treat an illness may have been prepared improperly, or the wrong plant may have been picked along with the correct one, tainting the remedy. Some preparations may be too strong for some patients, particularly infants or those weakened by serious illness. The use of any herbal preparation should therefore be approached with great caution, even if purchased at a health-food store or other commercial outlet. Herbal remedies are not well regulated and may be dangerous to take.

Folk medicine exists side by side with modern medical practices, and is often at odds with it. This is primarily because it very often does not conform with what is scientifically known about the causes of illness and disease and what are thought to be the most effective medical treatments. For those who use and believe in folk medical practices, their knowledge has been acquired from generations of others that have used the treatments.

Folk medicine traditions stress the importance of balance and harmony within the body. A sense that each person is connected to the earth and the cosmos is very important, as is the belief that an illness should be treated with every resource available. Herbal preparations, prayer, magic, diet, exercise, and proper social relations are all viable tools in the effort to maintain health.

For public health practitioners, an awareness of the diversity of health beliefs and practices that may be encountered among those who use more traditional folk medicine approaches, and the ability to suspend judgement about those who use them, is an important step in learning to work more effectively with the diverse folk medicine traditions they encounter in their practice.