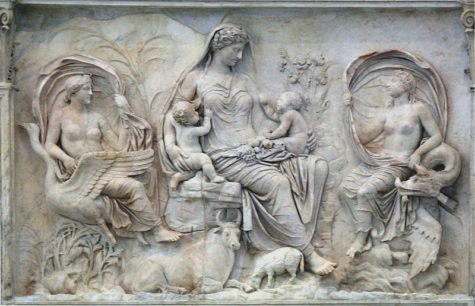 On December 13, the anniversary of the Temple of Tellus was celebrated along with a lectisternium (banquet) for Ceres, who embodied “growing power” and the productivity of the earth. This day was known as The Sementivaem, and was the second of two yearly festivals of Tellus Mater, the Roman earth goddess.

In private life sacrifices were offered to Tellus at the time of sowing and at harvest-time, especially when a member of the family had died without due honors having been paid to him, for it was Tellus that had to receive the departed into her bosom. At the festival of Tellus, and when sacrifices were offered to her, the priests also prayed to a male divinity of the earth, called Tellumo.

When an oath was taken by Tellus, or the gods of the nether world, people stretched their hands downward, just as they turned them upwards in swearing by Jupiter.

The Temple of Tellus was the most prominent landmark of the Carinae, a fashionable neighborhood on the Oppian Hill. It was near homes belonging to Pompey and to the Cicero family.

The temple was the result of a votum made in 268 BC by Publius Sempronius Sophus when an earthquake struck during a battle with the Picenes. Others say it was built by the Roman people. It occupied the former site of a house belonging to Spurius Cassius, which had been torn down when he was executed in 485 BC for attempting to make himself king. The anniversary (dies natalis) of its dedication was December 13.

A mysterious object called the magmentarium was stored in the temple, which was also known for a representation of Italy on the wall, either a map or an allegory.

A statue of Quintus Cicero, set up by his brother Marcus, was among those that stood on the temple grounds. Cicero claims that the proximity of his property caused some Romans to assume he had a responsibility to help maintain the temple.

One Response to The Sementivaem

Promote Your Page Too
Bread Crumbs
A trail of bread crumbs in case you lose your way wandering through this site ... Pagan Calendar > Blog Page > December > The Sementivaem