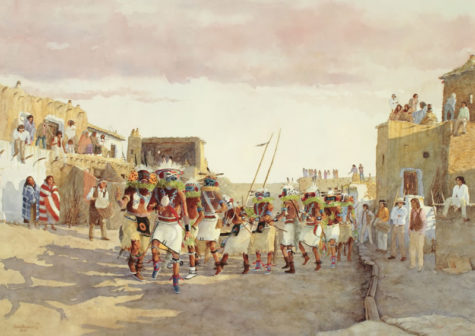 The Powamu Festival is the mid-winter ceremony and also called the Bean Planting Festival. It is observed in late January or early February. The celebration lasts 8 days and is mainly celebrated by the Hopi Indians in Arizona.

The Hopis call their ancestral spirits, Katchinas. They believe that for 6 months of the year, these spirits leave their mountain homes and visit the tribe. When they do this, they bring along with them good health to the Hopi and rain for their crops. The Powamu Festival celebrates the spirits return, just like the Niman Katchina ceremony in July celebrates their departure. 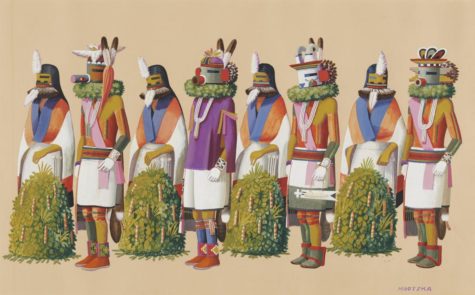 The preparations for the ceremony include repainting of the masks that will be worn by those Hopi who impersonate the Katchinas. On the third day, young men bring baskets of wet sand that they leave near the entrance to the kiva, the ceremonial meeting room (see more about this on Wuwuchim page). A hot fire also burns in every kiva of very Hopi village the entire 8 days of the Powamu Festival. Blankets are also stretched across the opening so that the atmosphere inside is similar to a hothouse.

Each man who enters the kiva during this period carries a basket (or bowl) of sand into it. He also plants a handful of beans, which sprout really fast due to all the heat and humidity inside the kiva.

Why bean sprouts? The Hopi believe that bean sprouts represent fertility. Because the Hopi rely strongly on the Katchinas to bring rain (and other good weather conditions) essential to the growth of their crops, bean sprouts also symbolize the approaching spring too.

The Powamu comes to it’s conclusion with a dance that takes place in the nine kivas that dot the northeastern Arizona mesa. The bodies of the dancers are painted red and white and they wear squash blossoms in their hair. These are really yucca fibers twisted into the shape of a squash blossom. They also wear white kilts and sashes, plus leggings with a fringe of shells tied down the side. 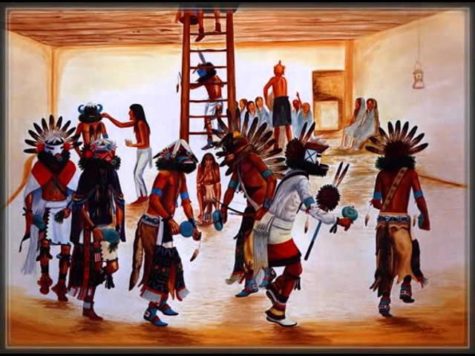 The dance takes place inside the hot kiva and is done in two lines. When the dance is over, the dancers then leave for the next village’s kiva, and another group arrives. So, by the time the night is over, each group will have danced at all of the nine kivas.

Then, the Katchinas arrive the next morning wear masks and painted bodies. They bring dolls and rattles for the girls; and, bow and arrows for the boys. Both of the boys and girls get the green bean sprouts that have been growing in the hot kivas.

Clowns run around making jokes, tripping each other and performing pantomines for everyone’s pleasure and fun. The conclusion of the Powamu ends with a feast in which bean sprouts are the main ingredient.

From this time until their departure in July, the Katchinas appear regularly in masked ceremonies performed in the Hopi villages. 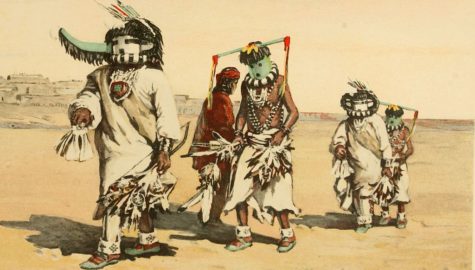 The men who impersonate the Katchinas wear masks which vary from year to year. A few of the masks will, however, remain the same. Before the dance, the masks are repainted and refurbished. They are made to fit closely over the head, hiding it totally. There is also a ruff of feathers, fur or spruce at the neck. The face on the mask usually resembles a bird, a beast, a monster or a man or a combination of all of these.

Those who wear the Katchina masks usually also carry an object associated with the being they are suppose to represent (i.e. bow and arrow, a yucca whip or feathers.)

The female Katchinas (who are not really women but are impersonated by the men) wear wigs or long hair styled in flat swirls over the ears known as squash blossoms. This hair style represents virginity.

The Soyokmana is a witch-like creature that carries a crook and a bloody knife. She goes along with the Katchinas as they go from Hopi village to another visiting their kivas. This group also goes from house to house demanding food, receiving gifts and presenting bean sprouts.

When the food they are offered does not meet their requirements, the Katchinas get upset and make hooting and whistling noises and refuse to leave until they have been properly fed! (This sort of reminds me of trick or treating on Halloween.) Sometimes that mean ol’ Soyokamana will use her crook to hook a child around the neck and hold him or her there, screaming in terror. Parents tell their children that this is a punishment for being naughty. 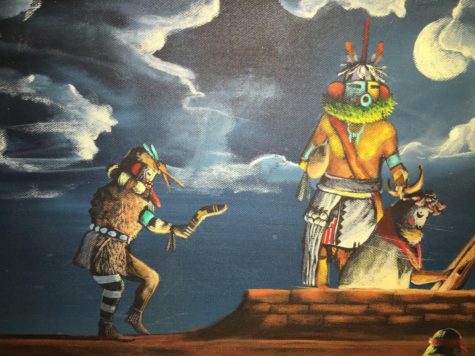 Up until a Hopi child is 9 or 10, they believe that the Katchinas are superhuman. So when Hopi children, who have been seeing the Katchinas at many ceremonial dances grow up, they are told that the real Katchinas no longer visit the earth, but are merely impersonated by men wearing masks.

The price for this sudden wisdom is to participate in a ritual flogging or whipping ceremony. Now, the children are NEVER struck hard enough to cause serious injury or pain! This ritual is not intended to be cruel. In fact, sometimes a child who is really frightened, isn’t flogged at all but has a yucca whip whirled over his or her head. Occasionally, an adult will be flogged too, which is believed to promote healing.

For four successive mornings, the child who has been flogged is taken to a special place on the mesa where he or she can make an offering at a shrine and casts meal towards the sun. During the first 3 days of this 4 day period, the child is not allowed to eat salt or meat. But, on the fourth day, these rules are lifted. And, from this time on, the child is now allowed to look at the Katchinas without their masks and at other sacred objects in the kiva without incurring any punishment.

Promote Your Page Too
Bread Crumbs
A trail of bread crumbs in case you lose your way wandering through this site ... Pagan Calendar > Blog Page > February > The Powamu Festival