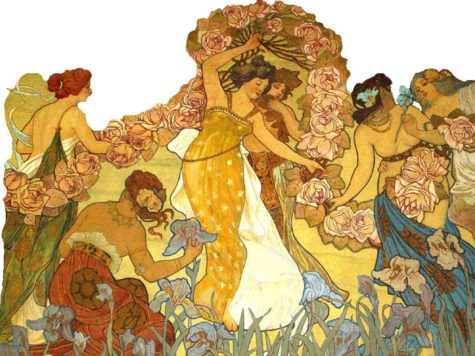 In ancient Rome, this day (June 24) was known as the Festival of Fata, the Goddess of Fate and Chance. She was more commonly called Fortuna, and this day was also known as the Festival of Fortuna. The Temple of Fortuna stood on the banks of the Tiber and on this day many Romans would make a pilgrimage on foot or by boats decorated with garlands of flowers. Fortuna was especially popular with poorer Romans and the servant class, who sought the blessings that more successful Romans already had.

Initially Fortuna, the Roman goddess of abundance, was honoured as a fertility goddess, but came to symbolise abundance as the fickleness of life and luck followed the cyclic ups and downs of life. She was invoked for good luck and prosperity, or lamented to during times of hardship.

She is usually depicted holding a rudder in one hand, steering our destiny as our karmic path progresses, and/or a cornucopia (or horn of plenty) signifying the wealth that she could bring. Often she has a wheel beside her, reminding us that she is the benefactor of life, death, and the wheel of fortune.

Promote Your Page Too
Bread Crumbs
A trail of bread crumbs in case you lose your way wandering through this site ... Pagan Calendar > Blog Page > June > Festival of Fata