Day of the Wren

The wren, the wren, The king of all birds,
On St. Stephen’s Day Is caught in the furze. 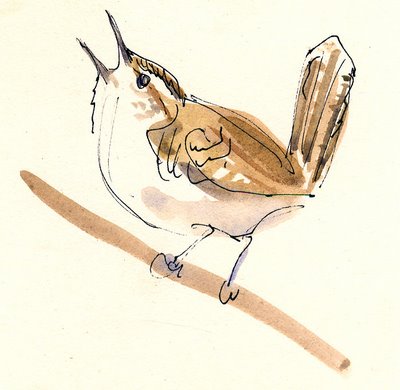 One of the most remarkable and dramatic Solstice customs involving animals is the Hunting of the Wren, which traditionally takes place on Boxing Day or St. Stephen’s Day. The custom lasted longest in Wales and the Isle of Man and still takes place today in Ireland. A description from 1840 describes it thus:

For some weeks preceding Christmas, crowds of village boys may be seen peering into hedges, in search of the tiny wren; and when one is discovered the whole assemble and give wager chase until they have slain the little bird. In the hunt the utmost excitement prevail; shouting, screeching, and rushing, all sorts of missiles are flung at the puny mark… From bush to bush, from hedge to hedge, is the wren pursued until bagged with as much pride and pleasure as the cock of the woods by the more ambitious sportsman… On the anniversary of St. Stephen the enigma is explained. Attached to a huge holly bush, elevated on a pole, the bodies of several little wrens are borne about… through the streets in procession… And every now and then stopping before some popular house and there singing the Wren song.

Various versions of this song have survived. Here is a typical one:

The wren, the wren, the king of all birds,
On St. Stephen’s Day was caught in the furze;
Though his body is small, his family is great,
So if it please your honor, give us a treat.
On Christmas day I turned a spit;
I burned my finger, I feel it yet.
Up with the kettle, down with the pan.
Give us some money to bury the wren.

The antiquity of this rather barbaric custom is clear enough. At one time the Wren, the “king of all birds,” must have represented the dying year king and was sacrificed on his behalf for the good of the land. The following story from Scotland suggest the reason for this rather plain little bird being addressed as King.

The Parliament of Birds:

At a gathering of birds, it was decided to elect a king by seeing which could fly the highest, and nearest to the sun. The eagle’s broad strong wings bore it higher than any other. It was about to acclaim its prowess, when it became aware of a “whirr-chuck” sound – the little wren had flown yet higher than the eagle, because it was cheekily perched on it’s back.

For many years during the 18th and 19th centuries, the Irish Wren Boys were accompanied by masked guisers, including the ubiquitous lair bhan or White Mare. Nowadays, due in part to a shortage of wrens and to a somewhat more bird-conscious awareness, they are seldom hunted. Although the Wren Boys still circulate in Ireland, they no longer kill a wren, but proceed from house to house with a decorated cage.

Here is a different wren song sung by the guisers in Pembrokeshire, England, where the custom is no longer practiced, but the sacredness of the bird is remembered:

Joy, health, love and peace be all here in this place.
By your leave we will sing concerning our king.

Our king is well dressed, in silks of the best,
In ribbons so rare, no king can compare.

We have traveled many miles, over hedges and stiles,
In search of our king, until you we bring.

Old Christmas is past, Twelfth Night is the last,
And we bid you adieu, great joy to the new.

It is not of the newborn king of Winter, the Wondrous Child they are speaking, but King Wren, who is remembered in a curious song from Oxfordshire, that manages to encapsulate the more ancient significance of the custom.

From: The Winter Solstice

Promote Your Page Too
Bread Crumbs
A trail of bread crumbs in case you lose your way wandering through this site ... Pagan Calendar > Blog Page > December > December Lore > Day of the Wren