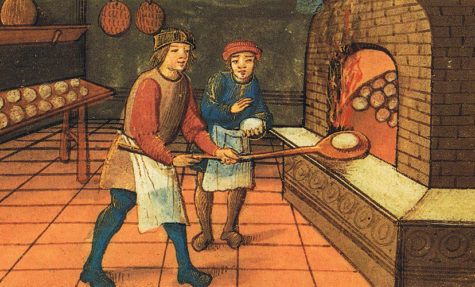 When you read the ancient and scholarly texts having to do with ancient Hellas, you will often come upon references to ‘honey cakes’ or ‘cakes’ in general. We might be tempted to interpret these to mean modern day cakes, but the ancient Hellenes would have most likely used flat cracker-type ‘cakes’, made from barley meal and honey. They were shaped to resemble animal or objects when the occasion called for it. unfortunately, no ancient recipe from Hellas has survived; perhaps because these cakes were known to all and passed down from mother to daughter from an early age. There was perhaps no need to write the recipe down at all.

The following recipe comes from an Alexandrian professor, Julius Pollux, who lived in the 2nd century CE. This is a simple, very basic recipe that may well have been used by the ancient Greeks and Romans.

Place the flour in a bowl, add the honey and olive oil and mix. Pour in the water little by little and continue mixing until a good dough is formed. Cool this in the fridge for about then minutes. I have found that using a quarter less water makes a better dough.

Tip the ball of dough onto a floured surface and roll out as thinly as possible. Use a pastry cutter to cut the dough and place the rounds on a greased baking tray.

The original recipe says to bake the cakes in an oven pre-heated to 200°C for about 15 minutes. I would suggest no more than twelve minutes, and will follow my own advice next time.

Transfer the cakes to a wire rack, cool and sacrifice. If you have made too many, save them in an air-tight container. The advantage of honey is not just its sweet taste, but its ability to keep pastry fresh for a long time, as it is an excellent liquid absorbent.