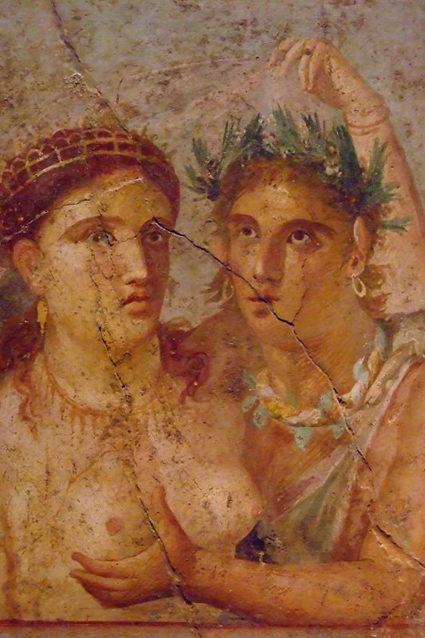 Valentine’s Day has its roots in ancient orgiastic festivals. On February 14, The Romans celebrated Febris (meaning fever), a sacred sexual frenzy in honor of Juno Februa, an aspect of the goddess of amorous love. This sex fest coincided with the time when the birds in Italy were thought to mate.

The ecstatic rites of the Goddess merged over time with those of Lupercalia, the bawdy festivities in honor of the pagan god of sex, drugs and rock-n-roll, Pan, which were observed on the following day, February 15.

Sulpicia, a first century BC Roman poet, describes her participation in the events with hearty candor:

“At last love has come. I would be more ashamed
to hide it in cloth than leave it naked.
I prayed to the Muse and won. Venus dropped him
in my arms, doing for me what she
had promised. Let my joy be told, let those
who have none tell it in a story.
Personally, I would never send off words
in sealed tablets for none to read.
I delight in sinning and hate to compose a mask
for gossip. We met. We are both worthy.”

Roman armies took their Lupercalia customs with them as they invaded France and Britain. One of these was the above mentioned lottery where the names of available maidens were placed in a box and drawn out by the young men. Each man accepted the girl whose name he drew as his love – for the duration of the festival, or sometimes longer.

Lupercalia, with its lover lottery, had no place in the new Christian order. In the year 496 AD, Pope Gelasius did away with the festival of Lupercalia, citing that it was pagan and immoral. He chose Valentine as the patron saint of lovers, who would be honored at the new festival on the fourteenth of every February. The church decided to come up with its own lottery and so the feast of St. Valentine featured a lottery of Saints. One would pull the name of a saint out of a box, and for the following year, study and attempt to emulate that saint.

The Feast of St. Valentine and the saint lottery lasted for a couple hundred years, but the church just couldn’t rid the people’s memory of Lupercalia. In time, the church gave up on Valentine all together. The lottery finally returned to coupling eligible singles in the 15th century. The church attempted to revive the saint lottery once again in the 16th century, but it never caught on. 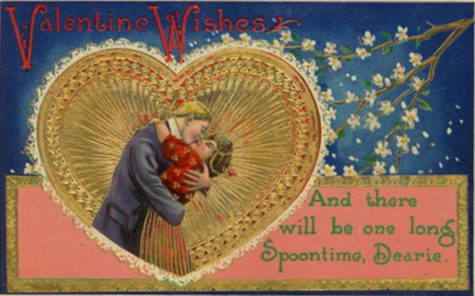 During the medieval days of chivalry, the single’s lottery was very popular. The names of English maidens and bachelors were put into a box and drawn out in pairs. The couple exchanged gifts and the girl became the man’s valentine for a year. He wore her name on his sleeve and it was his bounded duty to attend and protect her. The ancient custom of drawing names on the 14th of February was considered a good omen for love.

By the early 1600s, handmade valentines were customarily sent from admirers to sweethearts. About 1800 the first commercial cards appeared. Cards were usually sent anonymously. As early as 1822, an English official reported having to hire extra postal workers on this day. In 1849, Esther Howland of Worcester, Massachusetts, started selling quality valentines so popular that she was called “Mother of the American Valentine.”

Promote Your Page Too
Bread Crumbs
A trail of bread crumbs in case you lose your way wandering through this site ... Pagan Calendar > Blog Page > February > Valentine’s Day