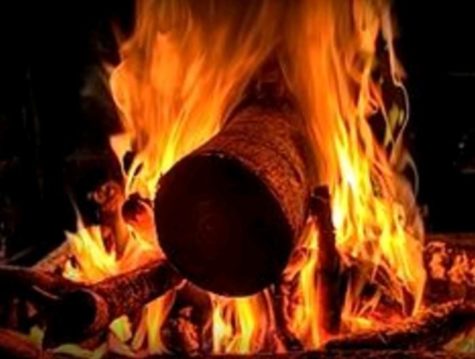 On the winter solstice, on the longest night of the year, people would place and set afire an entire tree, that was carefully chosen and brought into the house with great ceremony. The largest end of the log would be placed into the fire hearth while the rest of the tree stuck out into the room! The log would be lit from the remains of the previous year’s log which had been carefully stored away and slowly fed into the fire through the Twelve Days of Christmas.

It was considered important that the re-lighting process was carried out by someone with clean hands.

Tradition has it that the burning of the Yule log was performed to honor the Great Mother Goddess. The log would be lit on the eve of the solstice using the remains of the log from the previous year and would be burned for twelve hours for good luck and protection. 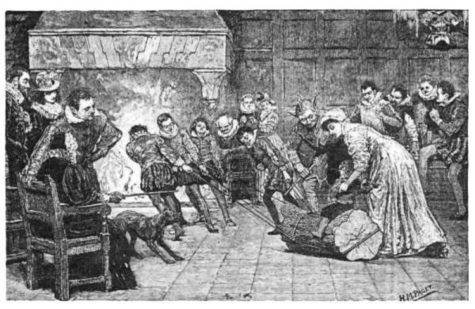 As the fire began all other lights would be extinguished and the people would gather round the fire. In thanksgiving and appreciation for the events of the past year and in bidding the year farewell each person would toss dried holly twigs into the fire.

The next phase of the burning of the Yule log commenced with people tossing oak twigs and acorns into the fire and they would shout out their hopes and resolutions for the coming New Year and sing Yuletide carols. The celebration of the Yule log fire ended with unburned pieces of the Yule log saved to start the fire of next winter’s solstice Yule log.

The custom of the Yule Log spread all over Europe and different kids of wood are used in different countries. In England, Oak is traditional. The “mighty oak” was the most sacred tree of Europe, representing the waxing sun, symbolized endurance, strength, protection, and good luck to people in the coming year. In Scotland, it is Birch; while in France, it’s Cherry. Also, in France, the log is sprinkled with wine, before it is burnt, so that it smells nice when it is lit.

The earliest Yule Log in France can be traced back to Celtic Brittany. When the Catholic Church stamped out the Pagan tradition, it adapted. In the 12th century, the ceremony became more elaborate. 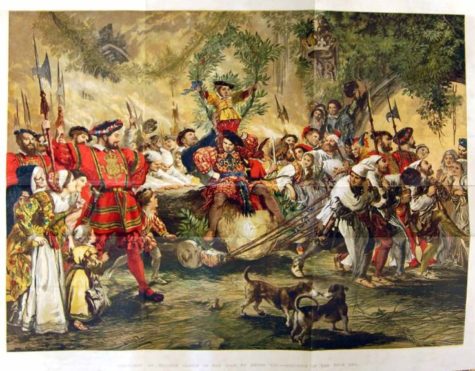 Families would haul home enormous logs and in some regions, the youngest child was allowed to ride the log home. As families dragged their logs home, passers by would raise their hats because they knew the log was full of good promises and its flame would burn out old wrongs.

For the Vikings, the yule log was an integral part of their celebration of the solstice, the julfest; on the log, they would carve runes representing unwanted traits (such as ill fortune or poor honor) that they wanted the gods to take from them.

People would also use the log as a way to predict events in the upcoming year. They would hit the burning log with tongs and the embers emitted would tell them what the harvest would be like. The more embers, the more corn. The fire was read and predictions were made for the coming year based on the sparks and flames they saw, like how many chickens or calves would be born, marriages in the family, health, wealth, etc. If the fire cast shadows on the wall, there would be a death in the family that year.

The remaining cinders would be placed in the soil so they would prevent grain diseases and produce a good harvest. They’d be spread around chicken coops to keep away foxes and in the barns and lofts where corn was stored to keep rats and weevils away. During a storm, throwing a handful into the fire would keep the house safe from lightening. 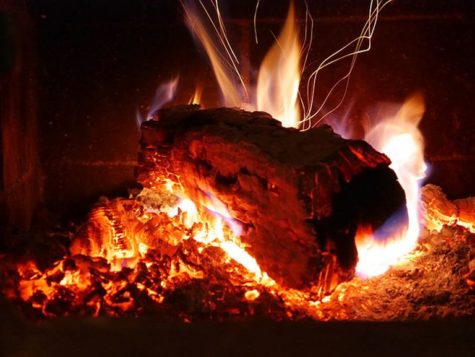 Promote Your Page Too
Bread Crumbs
A trail of bread crumbs in case you lose your way wandering through this site ... Pagan Calendar > Blog Page > Christmas Celebrations > The Yule Log