The Kalends of January

The Kalends of January (Jan 2nd, the 9th day of Christmas) was a significant part of the Roman Midwinter celebrations, and has lent its name to Midwinter festivals all over the Western world. For example, in Provence in France the festival is known as Calendas, in Poland it is called Kolenda, and in Russia, Kolyada. In the Czech Republic it is called Koteda, in Lithuania, Kalledos, and in Wales and Scotland, Calenig and Calluinn respectively – all these names derived from the Latin Kalendae, and all referring to the festival of midwinter. 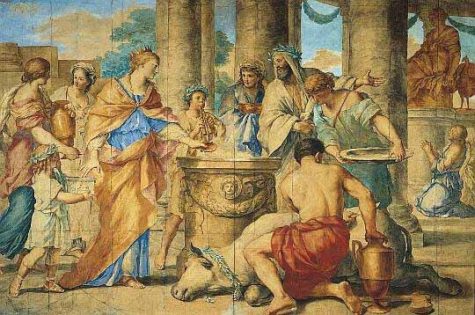 Initially the Kalends followed Saturnalia, beginning a few days of rest to allow aching heads and stomachs to recover! At this time new consuls were inducted into office, and for at least three days a high festival took place.

Houses were decorated with lights and greenery and gifts were exchanged. It was also the custom to give special presents to the emperor. These, called Votae, were left in the porch of the imperial palace, and it is recorded that the Emperor Calligula not only demanded these gifts from everyone, but also stood in the porch to collect them personally!

It may have been the memory of this that prompted the 4th century writer Libanius to describe the festival in terms that might be easily applied to the modern celebration of Christmas as to the celebrations in ancient Rome:

The impulse to spend seizes everyone..

People are not only generous themselves,
but also towards their fellow men.
A stream of presents pours itself out on all sides.

The Kalends festival banishes all that is
connected with toil, and allows men to give
themselves up to undisturbed enjoyment.

The slave also it allows, as far as possible,
to breathe the air of freedom…

Another great quality of the festival
is that it teaches men not to hold too fast
to their money, but to part with it
and let it pass into other hands.

Promote Your Page Too
Bread Crumbs
A trail of bread crumbs in case you lose your way wandering through this site ... Pagan Calendar > Blog Page > Christmas Celebrations > The Kalends of January