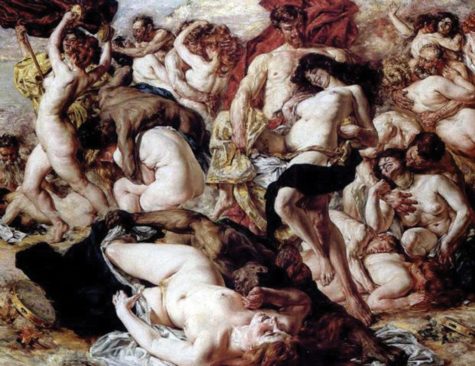 The Bacchanalia were free-spirited and sexually charged festivals that involved pagan mysticism, wild sex and divine communion which allowed its celebrants’ to achieve states of euphoria that hovered between divine ecstasy and the oblivion of nothingness. Those who have spent a week at one of the Hedonism resorts in Jamaica would probably find the sexually charged atmosphere of the Bacchanalia remarkably familiar.

The cult of Bacchus was a mystery religion that originated in Asia Minor (modern day Turkey) and spread throughout Greece and into southern Italy where it became extremely popular among the Romans. Despite their notoriety, not much is known about the Bacchanalia. This is largely due to the fact that mystery religions were closed to the uninitiated and their inner-workings kept secret from the outside world. However, scholars have managed to piece together fragments from ancient legal documents, historical texts and plays that can help give us a glimpse into the bacchanalian festivities.

The Bacchanalia first appeared in Greece around 700 BC and eventually found their way into Italy around the fourth century BC. The first bacchanals were held twice yearly in the middle of winter and were reserved for girls and women who performed their rites naked. By the time Rome had become the preeminent power in the Mediterranean after their victory over Carthage in the Second Punic War (202 BC), the rituals had opened up considerably making them quite popular with the natives.

Admission was extended to men and people of all social classes; even slaves could even join in on the fun. With the increased popularity, celebrations were taking place as often as five times a month.

The time and location of the bacchanals were usually closely guarded secrets. Priests and priestesses preferred to hold their gatherings in secluded forests where their privacy could be ensured. On the day of the festival, devotees would prepare some goats by painting their horns gold. Special torches dipped in sulphur and charcoal was also made. Devotees often wore fawn skins that emulated forest animals. Skimpy outfits or even complete nudity was also par for the course. Participants would often carry along their favorite sex toy; women would bring sexy wands while men might bring along a wooden phallus.

The aim was to achieve a heightened state of ecstasy in which the devotee’s souls would be temporarily freed from their physical existence. It was in these moments that the worshipers hoped to commune with Bacchus and obtain a glimpse of what they would someday meet in the afterlife after their resurrection.

The festival would reach its climax with frantic feats of strength and ecstasy, such as ripping trees out of the ground and eating the raw flesh of their sacrificial animals. The latter act was a sacrament similar to communion where the devotees assumed the identity of Bacchus. By symbolically drinking his blood and eating his body, the devotees believed they became one with Bacchus.

The euphoric devotees would then rush over to the banks of a nearby river with their flaming torches and dip them into the water. Since their torches were made with sulfur and charcoal, they would emerge from the water still burning, a symbol of Bacchus’s power.

Promote Your Page Too
Bread Crumbs
A trail of bread crumbs in case you lose your way wandering through this site ... Pagan Calendar > Blog Page > Greek Festivals > The Bacchanalia