January 9th is a day of remembrance for Raud the Strong. Here’s his story:

When Raud refused to give up Asatru (Icelandic for “Æsir”), King Olaf Tryggvason of Norway executed him by making him swallow a snake. His land and all his wealth was then confiscated. 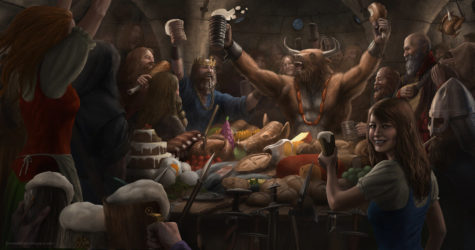 Praise Raud the Strong by lifting a horn (or cup or glass) in his honor, and by doing something deliberate to spread the religion King Olaf tried so hard to stamp out. Alternatively, you might want to hold a Sumbel, a drinking-ritual in which a drinking horn full of mead or ale is passed around and a series of toasts are made, usually to gods, ancestors, and/or heroes of the religion.

The toasts vary by group, and some groups make a distinction between a “regular” sumbel and a “high” sumbel, which have different levels of formality, and different rules during toasting. Participants may also make boasts of their own deeds, or oaths or promises of future actions. Words spoken during the sumbel are considered carefully and any oaths made are considered sacrosanct, becoming part of the destiny of those assembled.

Promote Your Page Too
Bread Crumbs
A trail of bread crumbs in case you lose your way wandering through this site ... Pagan Calendar > Blog Page > January > Raud the Strong`s Day